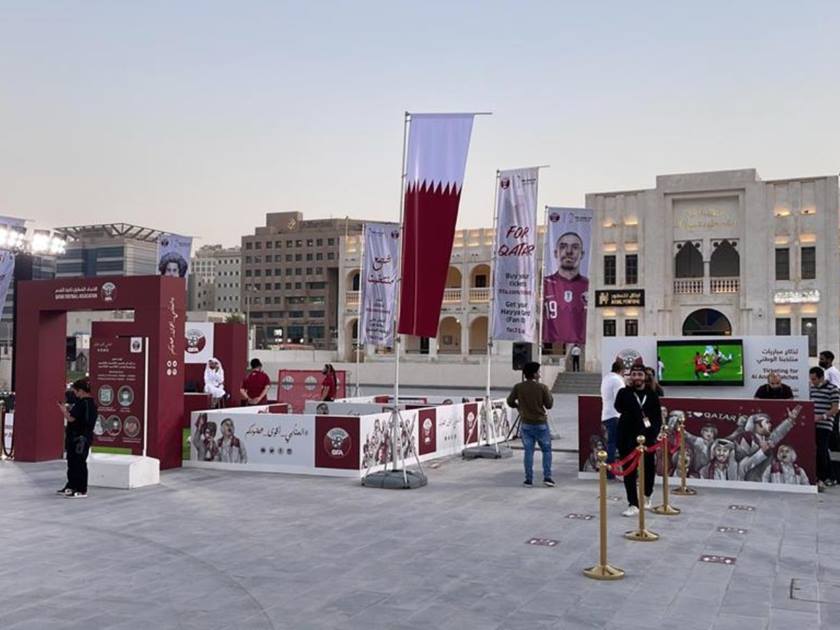 Doha, 13 August 2022 - The Qatar Football Association (QFA) continues its preparations to support the first team before the start of the FIFA World Cup Qatar 2022, through marketing and media plans that will motivate players and fans to ensure distinguished first participation in the World Cup, and push them towards making a unique achievement.
In his statements on the occasion of 100 days countdown to the FIFA World Cup, Director of Marketing and Communications at the Qatar Football Association (QFA) Khaled Mubarak Al Kuwari said that a distinct marketing and media plan has been developed to promote the participation of the Qatari team in the tournament. He added that this plan is an extension of the work carried out by QFA in the past during the team's participation in the Copa America, the Concacaf Gold Cup, the European qualifiers for the FIFA World Cup Qatar 2022, and the FIFA Arab Cup Qatar 2021.
He said that the main objective of the plan is for the fans to obtain tickets for the national team matches at an early date. He pointed out that the QFA launched a promotional campaign in this regard via social media platforms as soon as FIFA announced the release of tickets, and the federation held coordination meetings with its commercial partners to discuss the procedures for promoting the national team's participation in this major global event.
Al Kuwari indicated that distinguished works in the infrastructure and construction of the World Cup stadiums had been completed according to the timetable that was previously approved, thanks to direct coordination between the QFA, the FIFA and the Supreme Committee for Delivery and Legacy, pointing to the QFA's participation in workshops organized by FIFA to learn more about the marketing and media aspect.
The Director of Marketing and Communications at QFA said that Ooredoo has launched a campaign using photos of the national team players in the streets, while another campaign continues with Qatar Shell, in addition to announcing other events that will be held in Msheireb, all of which are aimed at one goal to support the team in its first participation in the World Cup on its home soil and among its fans, pointing out that there is coordination with some government agencies to put photos of the team's players on their main buildings.
He pointed out that many events will be held on the occasion of Qatar's participation in the World Cup, where there will be more than one event, whether in Msheireb or Lusail, in addition to various other activities with schools and government agencies. He explained that the QFA is working according to an organized schedule, as all details of this program will be announced during the coming period, in addition to launching multiple intensive campaigns on social media platforms during September by providing diverse and different content.
Director of Marketing and Communications at QFA Khaled Mubarak Al Kuwari stressed the federation confidence in the Qatari community's support for the tram and the players during the coming period. He expressed QFA's readiness to support any public initiative to motivate and encourage the team, stressing at the same time that Qatar is ready and prepared to welcome the fans of the game from all over the globe where they will find the best conditions of comfort and warm welcome.