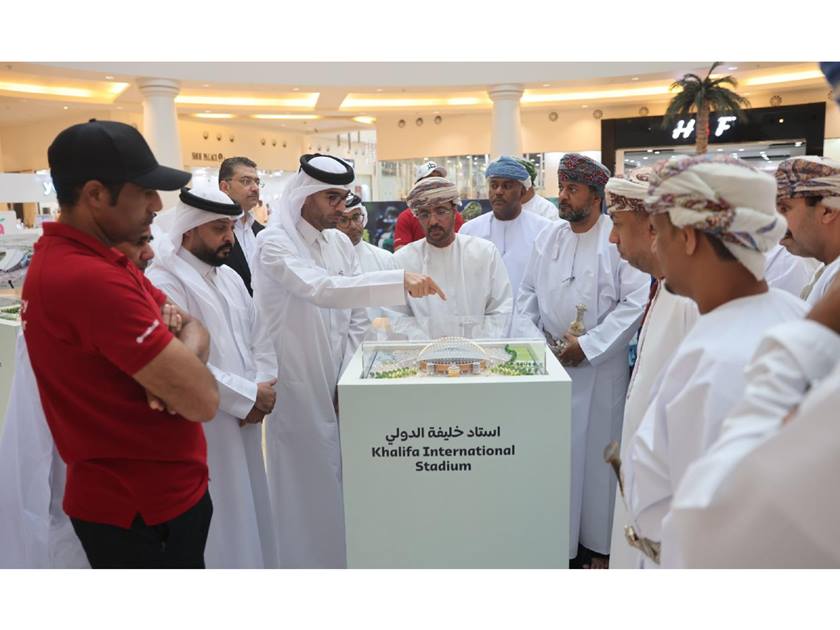 Dhofar, 17 August 2022 - The FIFA World Cup Qatar 2022 exhibition was opened in the Sultanate of Oman, at the Salalah Gardens Hotel in Dhofar, which reviews the history of the World Cup tournaments, participating teams, the most prominent stars and legends in football, in addition to the stadiums that are scheduled to host the upcoming tournament next November and December.
The exhibition also included a collection of documentary photographs about the history of the Sultan of Oman Football Cup since its inception in the seventies of the last century.
This exhibition is part of the activities of the Arab Sports Media Forum in Dhofar governorate under the title "World Cup in Oman", organized by the Omani Journalists Association represented by the sports media committee until August 19, with the participation of more than 100 media and sports personalities at the Sultan Qaboos Cultural Center.
The roundtable session was held in the presence of Local and Regional Media Expert at the Supreme Committee for Delivery & Legacy (SC) Mohammed Al Khanji, the Legacy Ambassadors, and former Qatari international players Ahmed Khalil and Mubarak Mustafa, with the participation of all journalists and sports media participating in the forum.
At the beginning of the session, Chairman of Oman Journalist Association Dr. Mohammed Al Araimi expressed his hope that Qatar would host a unique and distinguished edition of the World Cup, which is a championship for all Arabs.
After that, the Legacy Ambassadors presented an overview of the roles assigned to them and reviewed the work they have done over the past period by participating in various sports events, opening stadiums and visiting various institutions, schools, colleges and universities.
The session also witnessed open discussions by participants from the Gulf, Arab and Omani media on the mechanisms of selecting and working ambassadors and presented many proposals.
For his part, vice president of the Omani Journalists Association and Chairman of the Sports Media Committee Dr. Salem bin Hamad Al Jahouri stressed the importance of the forum in highlighting the most prominent event in the region, the FIFA World Cup Qatar 2022.
For his part, Local and Regional Media Expert at the Supreme Committee for Delivery & Legacy (SC) Mohammed Al Khanji said: "we are pleased in the organizing committee of the FIFA World Cup Qatar 2022 to meet with our brothers in the Sultanate of Oman and various Gulf and Arab countries. This forum comes as part of the preparation for the championship, and also discusses the media role in the Sultanate and the rest of the Gulf and Arab countries to highlight the World Cup," pointing out that the Sultanate of Oman station is an important and influential station through its large and huge preparations, and it stems from the hearts of Omanis and its message reaches the world.
The forum will include a special seminar on the FIFA World Cup Qatar 2022 with the participation of the officials of Supreme Committee for Delivery & Legacy (SC) and a session on the Gulf and Arab sports media with the participation of a group of leading Gulf and Arab media, and the role of the Arab media in organizing this global event.
In conjunction with the forum, the Legends match of football stars will be held in Dhofar governorate, hosted by TAQA club, with the participation of 60 players, technical and administrative football stars who represented Al-Nasr, Dhofar, Al-Ittihad, Salalah and Murbat clubs and participated with the national teams in the eighties and nineties of the last century, foremost of them Hamtout Jomaan and Younis Aman from the eighties generation and Hani Al-Dhabit, Mohammed Rabi and Fawzi Bashir from the golden generation.