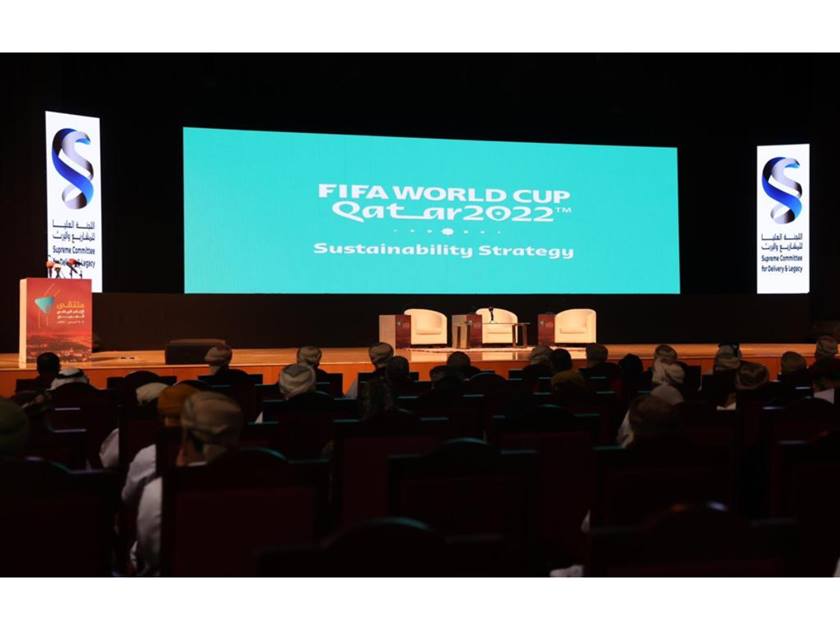 Dhofar, 17 August 2022 - A special seminar on the FIFA World Cup Qatar 2022 was held within the activities of the Arab Sports Media Forum, officially opened Wednesday in the governorate of Dhofar in the Sultanate of Oman under the titled "World Cup in Oman", organized by the Omani Journalists Association, represented by the Sports Media Committee. The event will until Friday with the participation of more than 100 media and sports figures.
The seminar, attended by officials of the Supreme Committee for Delivery and Legacy (SC) and a number of journalists and sports media participating in the forum, reviewed the work of the Supreme Committee for Delivery and Legacy, the latest preparations for the FIFA World Cup Qatar 2022, the mechanisms and facilities for the entry of fans and places of residence, the mechanism for obtaining media permits by FIFA, and the facilities that will be provided to various media professionals and journalists.
The agenda of the Arab Sports Media Forum includes dialogue and discussion sessions on the FIFA World Cup Qatar 2022, and a number of visual presentations about this tournament.
The official opening of the Forum was attended by SC Deputy Director-General, Marketing, Communications and Experience of the FIFA World Cup 2022 Khalid Al Mawlawi, Mayor of Dhofar Dr. Ahmed bin Mohsen Al Ghassani, and advisor in the Ministry of Culture, Sports and Youth Khalid bin Salem Al Ghassani.
Yesterday, the Forum witnessed the opening of an exhibition of the FIFA World Cup Qatar 2022 at Salalah Gardens Hotel, which reviewed the history of the World Cup tournaments, participating teams, the most prominent stars and legends in football, in addition to the stadiums that are scheduled to host the upcoming tournament during the next November and December.
The exhibition also contained a collection of documentary images about the history of the Sultan of Oman Football Cup since its inception in the seventies of the last century.