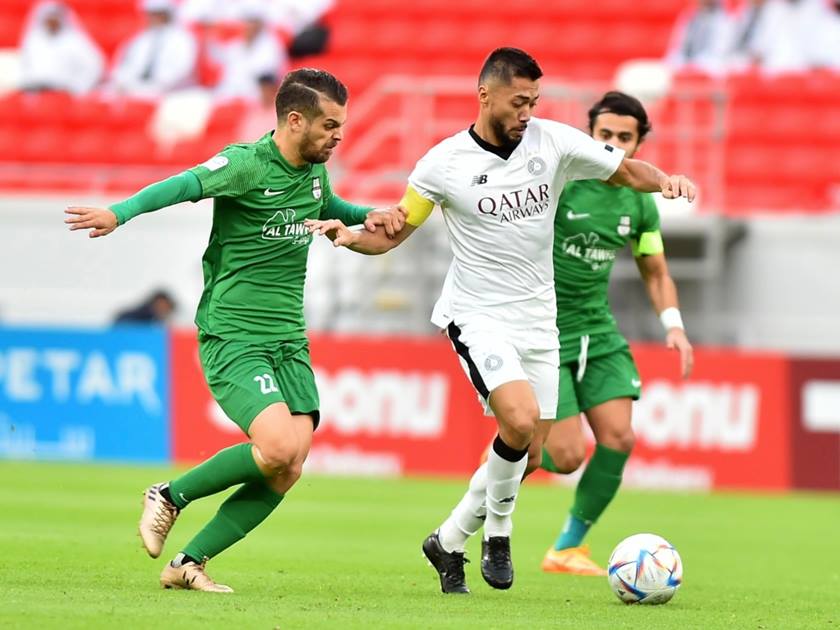 Doha, 17 August 2022 - Al Sadd scored a delightful 3-2 win over Al Ahli in Week 3 of the 2022-2023 season QNB Stars League at the Ahmed bin Ali Stadium on Tuesday.
This was the reigning champions first win of the season and was achieved through a fine effort of their captain Rodrigo Tabata in the final minutes of the match. The teams were locked 2-2 at half-time. The goals for Al Sadd were scored by Ahmad Al Saeed (18th minute), Guilherme Torres (45+3 minute) and Rodrigo Tabata (87th minute).
For Al Ahli, Yazan Al Naimat scored in the ninth minute and Sofiane Hanni in the 42nd minute. It was an exciting clash with plenty of goalmouth action, where the goalkeepers - Jehad Mohammed of Al Sadd and Yazan Naim of Al Ahli excelled under the bar.
QNB Stars League official website said that the first half was full of big action with four goals being scored, but the second half began on a sedate note, with Al Ahlis Abdulrasheed Ibrahim pulling up his hamstring just when he was moving with the ball dangerously into the box after being set up with a fine pass from Hanni. Al Ahli had another anxious moment, minutes later, when Hannis header hit the top of the left pole of the goal. Later, Al Ahli launched another attack on the Al Sadd citadel in the 70th minute, but the goalkeeper made a superb save.
The action was repeated at Al Ahlis end within minutes, with a Santi Cazorla free-kick flying in straight and fast but goalkeeper Yazan held fort. The much-desired breakthrough for The Wolves came through Tabata, who latched on to a great pass from Andre Ayew who worked his way past Al Ahli defenders. But to Tabatas credit, his touch was nimble and swift that beat the otherwise alert goalkeeper. The earlier four goals were delightful as well. The first came from Yazan Al Naimat, who made a deft left touch to score after a golden pass from Abdulrasheed.
The second was from Al Saeed, reflecting a repeat of the first one. Al Saeed waited for a perfect curling cross from Abdulla Al Yazidi to score. The third from Hanni was a powerful kick off a rebound from goalkeeper's hands off Yazan Al Naimats attempt. The fourth and equalising goal came from Torres, who scored off a Badghdad Boundejah shot which rebound off the goal post following a flag kick.
While Bounedjah could not make it to the list of scorers in the match, he was all over the opponents danger area and had several shots at the goal.