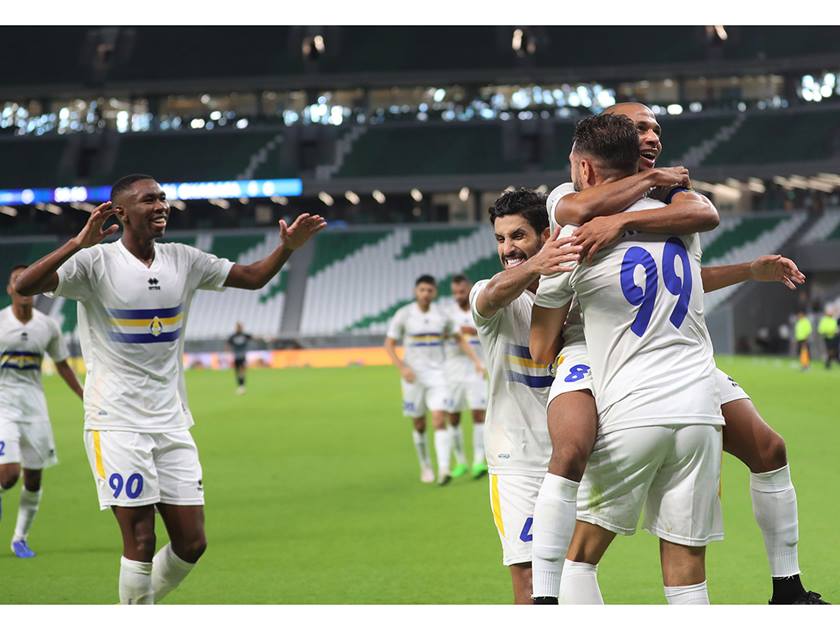 Doha, 24 August 2022 - Al Gharafa put it across reigning champions Al Sadd 2-1 in an exciting Week 4 match of the 2022-2023 season QNB Stars League at the Education City Stadium on Tuesday.
Ishak Belfodil (38th minute) and Yacine Brahimi (55th minute) scored for Al Gharafa, while Guilherme Torres found the target for a 10-man Al Sadd in the 72nd minute.
Al Sadd unfortunately lost their captain Rodrigo Tabata in the 29th minute to a red card as he stepped on to Saifeldeen Fadlallas toes.
The clash was played at a frenetic pace and produced many exciting moments. Al Gharafas Algerian star Brahimi stood out with his excellent play being involved in both the goals scored by his team.
In the first, Brahimi set up Belfodil with a beautiful pass down the left, going past three Al Sadd players, while Belfodil to his credit split past two defenders to beat the goalkeeper.
The opening goal set a flutter in the Al Sadd camp, which made some brilliant moves, but lacked at the finish.
Al Sadd began the second half more determined and, in the 51st minute, Andre Ayew made a cross to Baghdad Bounedjah, but his header went straight to the Al Gharafa goalkeeper.
Four minutes later, Brahimi show the stole with a class display of a field goal where he dribbled past from the left, and broke past five players before flipping the ball over the goalkeepers head. The goal sent the good crowd at the stadium into raptures.
Al Sadd immediately made a raid on the opposite goal, but it was foiled by good Al Gharafa defence.
In the 64th minute, Bounedjah produced a powerful left kick, but it was deflected by the outstretched left hand of Al Gharafa goalkeeper Qasem Burhan.
Al Sadd were then rewarded for their efforts, with Brazilian Torres making a stunning strike from well outside the box. His kick hit the left post before going in.
That was the only success Al Sadd got in the evening despite making several attacking attempts.
One of Al Sadds moves saw 15 well-co-ordinated passes being made before the final strike, but Al Gharafa have their wise goalkeeper Burhan to thank for holding fort.
The second win of the season, besides a draw, has taken Al Gharafas points tally to seven to be fourth on the table.
Al Sadd with four points are seventh.