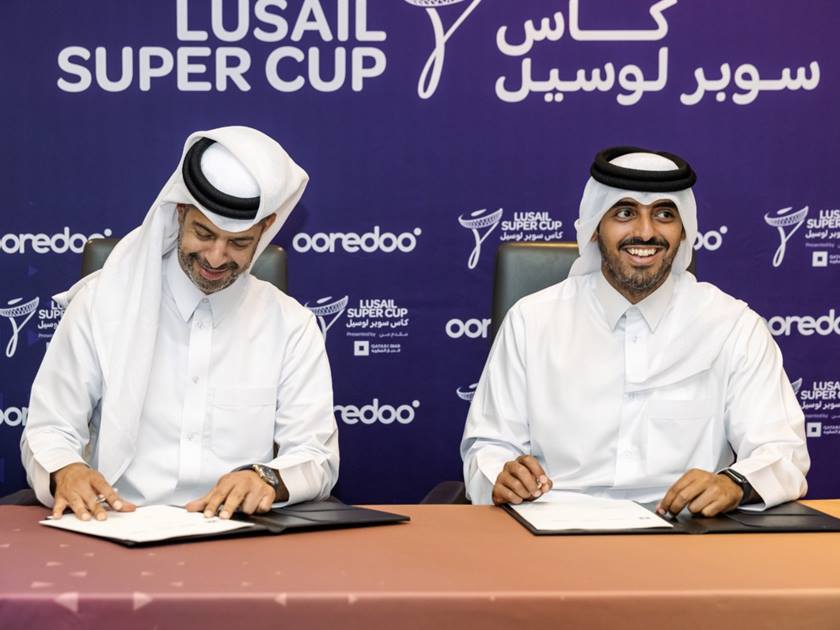 Doha, 30 August 2022 - The Local Organizing Committee (LOC) of Lusail Super Cup has announced Ooredoo as the Official Telecommunications Partner for the Lusail Super Cup, presented by Qatari Diar, which will be held at Lusail Stadium on Friday 9 September.

Ooredoo's involvement in the event was announced during a signing ceremony at Al Bidda Tower.

Nasser Al Khater, CEO, FIFA World Cup Qatar 2022 LLC, said: "We are pleased to partner with Ooredoo Qatar on this important milestone, as we head towards the FIFA World Cup Qatar 2022. We are only months away from the world's most important football competition an historic event that will take place for the first time in the Middle East and Arab world." HE Sheikh Nasser bin Hamad bin Nasser Al-Thani, Chief Commercial Officer at Ooredoo, said: "We are committed to connecting people every day as part of our corporate strategy, and nothing brings people together like football.

We are thrilled to be part of this momentous celebration, as we count down the days until the FIFA World Cup is here in Qatar." As the Official Telecommunications Partner of the Lusail Super Cup, Ooredoo will provide Wi-Fi infrastructure during the event, allowing fans to stay connected and share the excitement of the concert and match with the rest of the world through an uninterrupted and high-speed connection.

Lusail Stadium is Qatar's biggest FIFA World Cup Qatar 2022 tournament venue. It will host ten matches during the tournament, starting with Argentina versus Saudi Arabia on 22 November and culminating with the final on 18 December. The stadium boasts a host of sustainability features, including a roof made from PTFE that protects the venue from warm wind, keeps out dust and allows in enough light for the pitch to grow while providing shade to reduce the burden on the stadium's air conditioning. Recently, Lusail Stadium achieved a five-star Global Sustainability Assessment System rating for its design and build and a Class A* rating for construction management.

Ooredoo is an international communications company with a customer base of more than 100 million across the Middle East, North Africa and Southeast Asia.