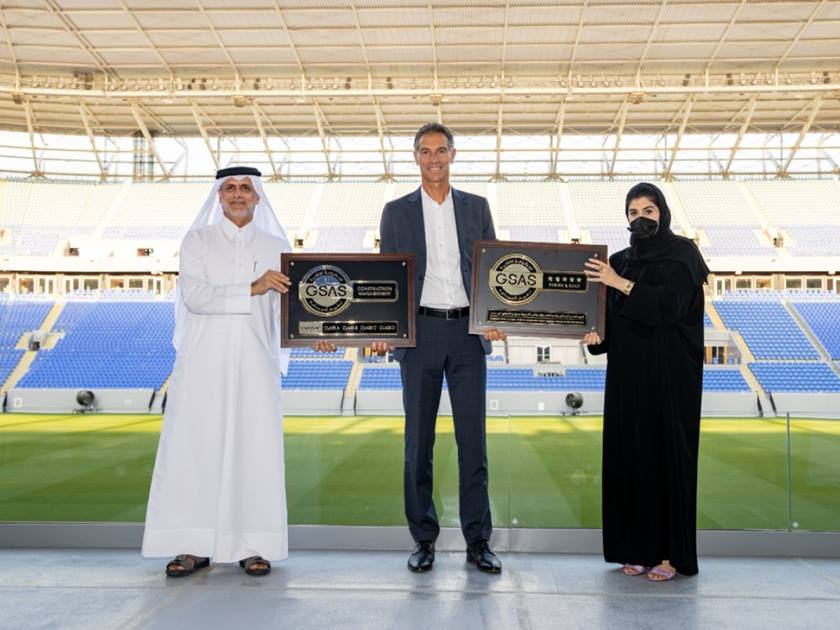 The 40,000-capacity venue is a landmark in sustainable stadium design and construction, having been built with prefabricated and modular steel elements such as standard certi­fied shipping containers. This reduced the waste generated during the production of stadium components and the waste created on site during construction. The use of modular elements also reduced the venue's construction duration. Water efficiency methods ensured that 974 reduced water use by 4

“Sustainability has been the primary focal point with Stadium 974. To receive top GSAS certification marks from GORD is further confirmation of our efforts to establish new, sustainable concepts of stadium design and construction that we hope will be adopted worldwide,” said Al Kuwari. “Stadium 974 is also a proud example of the legacy we intend to leave from Qatar’s hosting of the FIFA World Cup.”

As the f­irst-ever FIFA complaint stadium that can be fully dismantled and re-purposed post-event, 974 sets new standards in the building and usage of sustainable venues. This includes f­lexibility in the design to rebuild the stadium with the same capacity in a different location or build multiple smaller venues using the same materials. A study into the environmental impact of Stadium 974 was published earlier this year.

“By achieving these high ratings, our efforts in making Stadium 974 a reality is truly rewarding for everyone who was part of this unique project from the beginning,” said Al Meer. “Stadium 974 will always be synonymous with our sustainability targets for the FIFA World Cup and beyond.”

Al Jaidah added: “We thank all our contractors and stakeholders, including the stadium management team, for helping us to make Stadium 974 become a proud symbol of our sustainability objectives. This award is an important recognition of our goals to stage a carbon-neutral FIFA World Cup.”

“This is a great achievement for everyone that has worked on this project and made it a reality,” said Al Atwaan. “We look forward to welcoming football fans from around the world when Stadium 974 plays host to matches during Qatar 2022.”

Dr. Yousef Alhorr, Founding Chairman, GORD, said: “In meeting top GSAS standards, Stadium 974 has shown itself to be a remarkable achievement in sustainable design and construction. We congratulate the SC for taking the concept of building a fully-demountable stadium and turning it into an example of outstanding green building practice.”

Located in Doha – close to Hamad International Airport and opposite the stunning West Bay skyline – Stadium 974 hosted its first match on 30 November 2021 during the FIFA Arab Cup™.

Eight stadiums will host matches during the FIFA World Cup Qatar 2022™, which will take place from 20 November to 18 December. Each venue has achieved a minimum four-star rating under GSAS, which was adopted as a sustainability rating system by FIFA and will ensure all tournament-related infrastructure meets stringent environmental standards.

Stadium 974 will host seven matches up to the round of 16 stage during Qatar 2022, starting with Mexico versus Poland on 22 November.