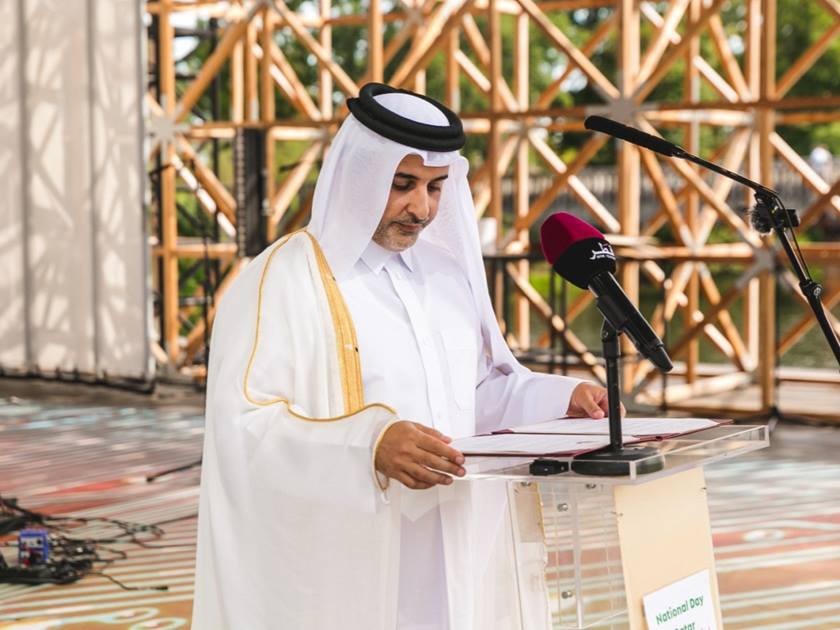 Floriade /Netherlands, 4 September 2022 - H.E. Minister of Municipality Dr. Abdullah bin Abdulaziz bin Turki Al Subaie underlined that the State of Qatar is making continuous efforts in the field of protecting the environment and promoting sustainable development, and has placed sustainability as one of the primary considerations in the design, preparation and presentation of the FIFA World Cup Qatar 2022 - a tournament that is environmentally friendly and contributes to building a lasting and sustainable legacy to achieve the United Nations Sustainable Development Goals.
Speaking at a ceremony held on the sidelines of his participation in the Floriade Expo 2022 in the Netherlands, HE the Minister of Municipality said that Qatars participation in this international exhibition comes before the State of Qatar hosts the Doha International Horticultural Expo 2023, and in line with Qatar National Vision 2030 which has set environmental development as one of its main pillars with the aim of developing a harmony between economic growth, social development and environmental protection.
HE the Minister highlighted Qatar's National Environment and Climate Change Strategy (QNE) launched by the State of Qatar in October 2021, which meets the country's aspirations to achieve a greener and more sustainable future.
HE Dr. Abdullah bin Abdulaziz bin Turki Al Subaie pointed to Expo 2023 Doha, which is the first international horticultural exhibition to be held in the Middle East and North Africa with the aim of introducing innovative solutions to reduce desertification. Held over 179 days on an area covering 170 hectares, the expo will kick off on October 2, 2023 under the theme "Green Desert, Better Environment" with the participation of about 80 countries, in addition to international organizations, representatives of the private sector, non-governmental organizations and the public.
His Excellency praised the efforts made by the Netherlands in organizing and hosting the Floriade Expo 2022, which brings together many countries to showcase their environmental and cultural achievements.
In conclusion, HE Minister of Municipality Dr. Abdullah bin Abdulaziz bin Turki Al Subaie underlined that the State of Qatar spares no effort in protecting and enhancing the environment and preserving the well-being of societies; expressing the State of Qatar's welcome to the participation of about 80 countries in the Expo 2023 Doha.
HE the Minister of Municipality visited the pavilions of a number of friendly countries participating in the exhibition, where he met with some officials.
The ceremony also included speeches by Vice Mayor of Almere Roelie Bosch, Commissioner-General of Floriade Expo 2022 Annemarie Jorritsma, HE Ambassador of the State of Qatar to the Kingdom of the Netherlands Nasser bin Ibrahim Al Langawi, and Commissioner-General of the Pavilion of the State of Qatar Mohammed Ali Al Khoury.
The ceremony featured a video about (Nest of the Desert) and the entry of the Qatari tower in the pavilion into the Guinness Book of Records, and an introductory video about Expo 2023 Doha, in addition to a distinguished participation by Qatari painter Haifa Al Sada who reviewed through live artistic drawings the most prominent landmarks of Qatar and the Qatari heritage, presenting drawings for the Qatari folk costume, falcons, desert and the natural diversity of the environment in Qatar.
On the sidelines of the ceremony, a Qatari folk band presented the Qatari traditional dancing (Ardah), in addition to a presentation of Qatar's most prominent traditional foods and sweets.