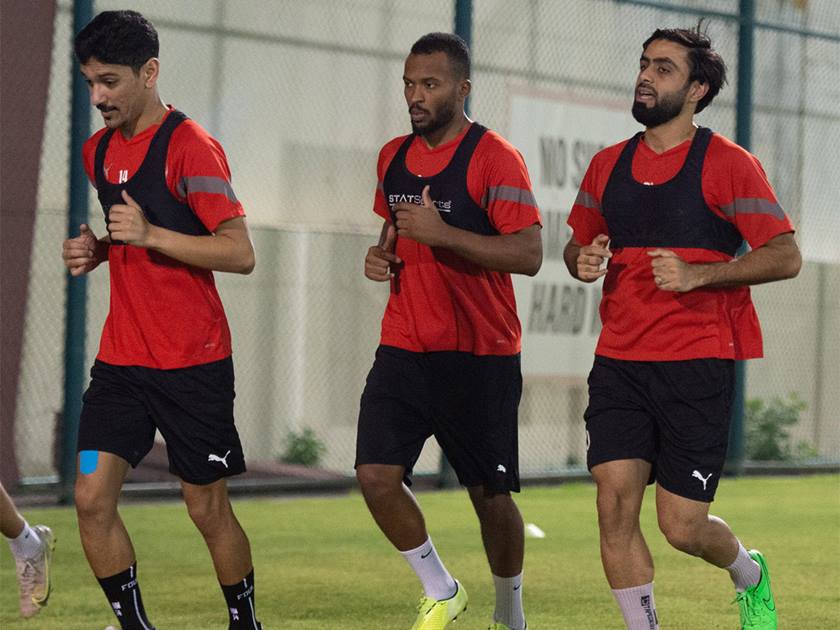 Doha, 5 September 2022 - The Week 6 of the 2022-2023 season QNB Stars League kicks off Tuesday with multiple teams fighting for the first place.

Al Arabi are smarting from their 0-3 defeat to Al Duhail in Week 5, their first loss of the new season after four consecutive wins.

Despite the loss, The Dream Team continued at the top of standings with 12 points, one point ahead of Al Wakrah, and two points more than Al Duhail, in third place.

Al Sailiya also lost their last match (1-2 to reigning champions Al Sadd). It was The Peregrines fourth defeat this season and they are 11th in the table with only three points.

Since their 2-1 win over Al Shamal in the second round, Al Sailiya have suffered three losses (against Qatar SC 1-2, Umm Salal 0-1 and Al Sadd 1-2) and therefore would desperately want to stop the slide.

Al Sailiya coach Sami Trabelsi is well aware of the power of the Al Arabi attack, which comprises Abdulaziz Al Ansari, Omar Al Somah and Yousef Al Msakni. So the task will be tough for the Al Sailiya defence and their goalkeeper Claude Amine.

As for Al Arabi coach Younes Ali, he would want his team to shrug off their heavy loss against Al Duhail and return to the winning ways to be back on track and stay on top.

This would surely add to Al Arabis already-strong prowess and stature in the league.

Both teams will clash in the first match of an action-packed week. Only a point separates Al Sadd and Al Shamal.

Both sides have players with abilities to make a difference and translate their coachs instructions into supremacy, control and goals.

Al Sadd, who are motivated by their recent win over Al Sailiya, are currently placed sixth with seven points (two wins, as many losses and one draw), while Al Shamal are ranked eighth with six points (two victories and three defeats).

Indications highlight that the winning chances of Al Sadd are more given the history of the teams in general in all local competitions. But that could well be more on paper than on the pitch as Al Shamal too have emerged as a challenging side.

Al Sadd, under new coach Juan Maneul Lillo Juanma, are looking for a second successive victory in order to reach double figures in the points tally ahead of facing Al Wakrah in Week 7.

In contrast, Al Shamal are eager to find their winning ways after their last two defeats (to Al Arabi and Qatar SC).

Al Shamal coach Hisham Zahid has been working with his team to find out ways to achieve the breakthrough and return to the positive methods they began the season with (they beat Al Rayyan 1-0 in Week 1 and Al Gharafa 2-1 in Week 3).

Al Gharafa, currently fifth in the standings with eight points, will look to maintain their good run and move ahead, while Umm Salal, 10th with five points, will also strive to score a win and improve their position in the league.

Both teams will therefore battle hard for the valuable three points, but it will not be easy. Both sides are keen to to be back on the winning path after their drawn results in the last round, where Al Gharafa played out an exciting 3-3 draw with Al Ahli and Umm Salal had a goalless draw against Al Rayyan.

Andrea Stramaccioni, the Italian coach of Al Gharafa, will be in the stands having received a red card during their match against Al Ahli along with defender Islom Tukhtakhujaev, who was also sent off.

Umm Salal coach Wesam Rizik will seek to lift his teams morale in the absence of their midfielder Dries Saddiki, who got injured in the last round.

Despite the absences, both teams still possess a lot in their armoury to come up with strong performances and achieve a good result.

With not much alternative but to win, Al Rayyan, who are at the bottom of the standings with just one point to their name, will be looking to find answers and a much-needed victory.

Al Rayyan are a challenging side, but have faced four reversals this season against Al Shamal, Al Arabi, Al Duhail and Al Ahli. The only draw they scored was against Umm Salal.

Al Markhiya, on the other hand, are in ninth place with five points (from a victory over defending champions Al Sadd, two draws and as many losses).

The match will also be a big test for Qatari coach Abdullah Mubarak, an experienced and big name, and his Al Rayyan counterpart, Chilean Nicolas Cordova.

Both teams have the strength and line-ups capable of providing a keen and enjoyable match for the fans. Al Rayyan have influential players in striker Yohan Boli and midfielder Steven Nzonzi, but they are also missing a number of other players due to injuries, including Palestinian defender Yaser Hamed.

Meanwhile, Al Markhiya would be counting on Moroccan Driss Fettouhi and their top scorer Ayman Hussein, who has scored three goals so far, to deliver a positive result for them.

The clash is expected to draw fans of both clubs in large numbers, given the absorbing contest and the battle to clinch three points to consolidate their strong positions in the standings.

Al Wakrah are currently second with 11 points (three wins and two draws), while Al Ahli are fourth with eight points (two wins, as many draws and one loss).

Al Wakrah were held to a goalless draw in their last match by Al Markhiya and their coach Marquez Lopez would be keen on the team returning to winning ways against Al Ahli.

But Al Ahli have scored nine goals in the league so far. They were involved in a thrilling 3-3 draw against Al Gharafa in their previous match and as such The Brigadiers will be a tough side for Al Wakrah to challenge.

Al Ahli coach Nebojsa Jovovic will, however, miss the duo of Shojae Khalilzadeh and Mohammed Al Ishaq, who were sent off during the clash against Al Gharafa.

That should provide Al Wakrah the opportunity to exploit Al Ahli's weaknesses if any during the match.

The match is of great importance to both teams and carries with it the excitement and challenge as each side aspires to gain the valuable three points to continue their good run.

Currently, Al Duhail are third with a points tally of 10 (three wins, a draw and one loss), while Qatar SC are seventh with seven points (two wins, as many defeats and one draw).

Having found their winning touch, both teams will go into the clash with renewed confidence.

Al Duhail coach Hernan Crespo will seek another good show from many distinguished players in the team.

However, his Qatar SC counterpart Youssef Safri would be aware that the match will be strong and difficult. He would therefore aim to lift the side to put out their best in search of a second successive win.

The match between these two teams is expected to have all factors of strength, excitement and suspense, especially as both sides have a challenging attack, reliable midfield and strong defense.