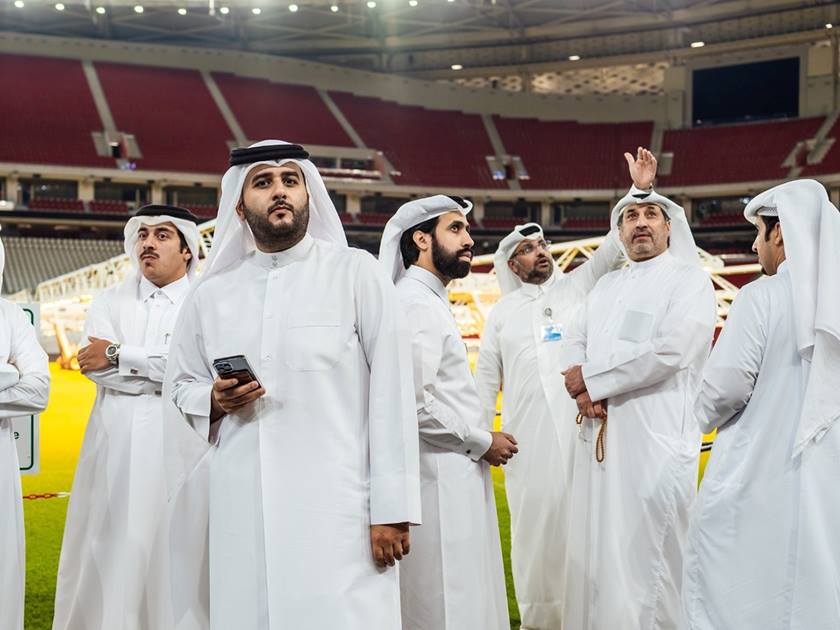 Doha, 14 September 2022 - The Supreme Committee for Delivery and Legacy organized a number of visits for representatives of the Qatari families majlises to the FIFA World Cup Qatar 2022 stadiums, to brief them on the latest preparations to host the tournament at the end of this year.
The Supreme Committee was keen to organize tours for residents of the neighborhoods that host the eight World Cup monuments and held meetings that addressed all residents' inquiries related to accommodation, match tickets, transportation, and requests for a Hayya card, as part of efforts aimed at involving community members in preparing for the upcoming event.
Community Engagement and Commercial Development Executive Director at the Supreme Committee for Delivery and Legacy Khalid Al Naama stressed the importance of engaging community members and enhancing their enthusiasm to ensure hosting an exceptional edition of the World Cup. He expressed his honor to communicate with community members in Qatar, and that there is no doubt that these fruitful discussions will provide the committee with important insights that contribute to strengthening their plans to organize a historic tournament and build a sustainable legacy for the World Cup in Qatar and the region.
For his part, Member of the Municipal Council Jaber bin Muhammad Al Suwaidi praised the efforts made by the Supreme Committee in terms of community participation, and its keenness to involve community members in the World Cup preparation journey, with the aim of playing their role in the success of the global event. He pointed out the importance of listening to the views of the Qatari community and consulting with them regarding the sports edifices in their neighborhoods.
He added that these visits bear many positive results, among which is that community members remain in direct contact with those responsible for organizing the World Cup, obtain information about the event from its reliable sources, and provide opinions and suggestions that will contribute to organizing an exceptional version of the World Cup in Qatar.
One of Al Thumama residents Hamad Khamis Al Obaidly said that the interest of the people in charge of organizing the World Cup in communicating with members of the Qatari community enhances the feelings of enthusiasm for the world tournament, and motivates the residents to do all they can to organize a distinguished tournament that enhances the position of Qatar on the global stage.
He expressed his pride in what the State of Qatar has achieved on its journey on the road to the World Cup, and that they are pleased with the keenness of the Supreme Committee to consult with them and listen to their views. He added that they all look forward to welcoming the whole world to Qatar at the end of this year.
The visits of the Qatari families majlises included Al Thumama, Al Bayt, and Al Janoub stadiums, and this month their visits will continue to include more World Cup stadiums.
In 2014, the Supreme Committee launched a series of visits to majlises across Qatar to inform members of society of the ongoing preparations to organize the first edition of the World Cup in the Arab world.