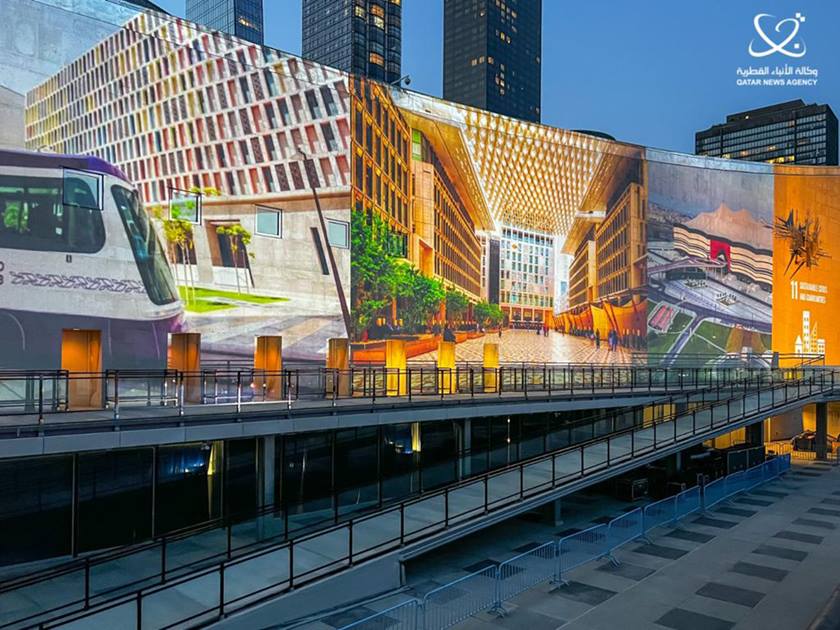 New York, 18 September 2022 - The State of Qatar launched "Scoring For The Goals" campaign at the United Nations (UN) Headquarters, as part of its preparations to host a sustainable version of the FIFA World Cup Qatar 2022, which is considered the most sustainable edition in the history of the international event.

The ceremony was also attended by HE Minister of Education and Higher Education Buthaina bint Ali Al Jabr Al Nuaimi, HE Secretary General of the Supreme Committee for Delivery and Legacy Hassan Al Thawadi, and HE Qatar's Permanent Representative to the UN Sheikha Alya Ahmed bin Saif Al-Thani, along with several dignitaries and high-profile officials from the UN Secretariat General.

Built on the General Assembly Resolution No. 76/259, "Scoring For the Goals" highlights the value of football in enhancing sustainable development, peace, tolerance, inclusion and climate action. It also emphasizes the significance of unity for individuals and nations while enjoying the power of football when the World Cup kicks off Nov. 20, particularly in light of the need to use this power for a better future for the current and future generations, as well as the need to achieve the UN's 17 goals to build a more sustainable, peaceful and prosperous planet for all humanity.

HE Secretary-General of the Supreme Committee for Delivery and Legacy Hassan Al Thawadi inaugurated the ceremony, which also witnessed the presence of high-level personalities from the teams of the other 31 countries that qualified for the tournament.

In his speech, His Excellency Al Thawadi welcomed the attendees to the event that "is contributing to the international community's multilateral efforts in achieving sustainable development goals". He added "Tonight's gathering marks the commencement of Scoring For The Goals initiative led by the State of Qatar and the Education Above All Foundation, an initiative designed to integrate and enhance football's role as a vehicle to attain the targets comprising the 17 SDGs".

HE the Secretary-General of the Supreme Committee for Delivery and Legacy emphasized that "sport is uniquely equipped to realize the ambitions of the 2030 agenda".

Commenting on the role of football in uniting peoples, His Excellency said "Football in particular breaks down barriers, creates friendships and enhances cultural understanding, no matter beliefs, nationality or economic status. Football touches our passion and brings out the best of us as individuals and human beings.....when harnessed properly, it profoundly improves the lives of all and transforms our world for the better. " "This transformational spirit that we have long recognized is serving as the inspiration and guiding light for a successful bid to bring the FIFA World Cup to the Middle East and the Arab World for the first time".

His Excellency noted that the State of Qatar powerfully urged the voting members that "the time is now to bring the World Cup to the Middle East." "In less than 60 days, our country and our region take central stage," said His Excellency, highlighting the expected arrival of more than a million people, many of them for the first time, in addition to billions of people who will be watching the tournament on television and phones.

"Visitors and viewers will experience a country and region proud of its heritage and culture, warm and welcoming our guests and intensely passionate in our love of football," His Excellency said.

His Excellency noted that the World Cup brings people together "in a way and scale that no platform can match" in an era where political division thrives, stressing the importance of treasuring "the platforms that really unite" amid disinformation and misinformation.

HE Al Thawadi said, "Now, the greatest legacy of this World Cup will be realized through people-to-people diplomacy, will be realized through the bonds created between peoples of vastly different backgrounds, and realizing that what unites us is more important than what divides us, celebrating with our differences and sharing our common humanity." His Excellency stressed that hosting of World Cup was inspiring for the State of Qatar to undertake "social progress evidenced in national labor reforms." It also led to creativity through Qatar's commitment to hosting the most sustainable mega event in history and creating a human and economic legacy through programs aimed at providing hope and opportunities for young people in the region and beyond, HE added.

His Excellency hailed the State of Qatar's global initiative for the development of sports, represented by the Generation Amazing Foundation which "is built around the goals of sustainable development and operates in more than 40 countries, and has already met its target of reaching one million beneficiaries ahead of the World Cup".

"Scoring For The Goals" reflects the State of Qatar's vision and unites ambition, actual solidarity and solutions to sustainable development goals, enabling the full potential of football to be realized, His Excellency added in conclusion.

The inauguration ceremony included a short video projection on the United Nations' 17 sustainable development goals, and identified relevant topics through compelling images and narration, stressing that the world will meet on November 20 to witness the power of football as a tool to promote peace and development, respect for human rights, and achieve gender equality and empowerment, empower women, girls, youth and addresss climate change.

The video also showed that it is time for the international community to Score for the Goals by giving all people a chance to prosper, ending extreme poverty and hunger, improving nutrition, promoting healthier living, expanding access to water, and improving sanitation.

The video asserted that the achievement of the UN's SDGs can be guaranteed through providing education for all, achieving gender equality and empowering all women and girls, empowering individuals through decent work, innovation, and infrastructure, and reducing inequalities.

The video also highlighted the measures that must be taken to save the planet by ensuring access to affordable and clean energy for all, building sustainable cities and communities, promoting responsible production and consumption, and keeping the oceans and seas healthy, which are essential to our existence as well as promoting peaceful and inclusive societies, providing access to justice for all, and building effective, accountable, and inclusive institutions.

The FIFA World Cup Qatar 2022, due to be held from Nov. 20 to Dec. 18, is the first-ever World Cup to be held in the Middle East and the Arab region. It will receive and unite billions of people from around the world. It will highlight the unique identity and culture of the Arab region, as well as leave deep social, human, economic and environmental transformations.

Regarded as the most eco-friendly World Cup in history, this global tournament seeks to bring about tangible progress toward the achievement of the Sustainable Development Goals (SDGs), as laid out in the 2030 Agenda for Sustainable Development and emphasized in General Assembly Resolution A / RES / 76/259 titled " FIFA World Cup Qatar 2022" which confirms the power of football to enhance peace, development, respect of human rights, gender equality, empowerment of women and girls and climate action.