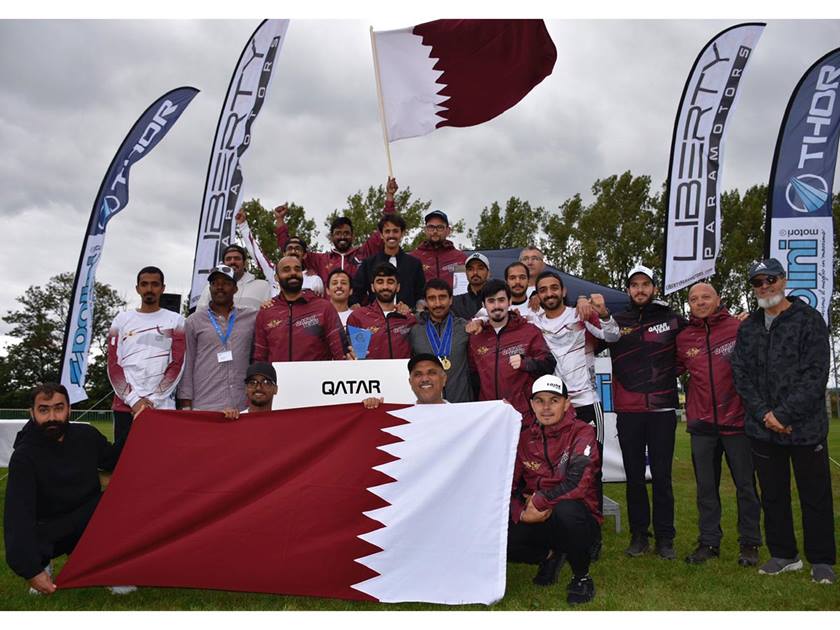 Prague, 18 September 2022 - The Qatari Paramotor Team of Qatar Air Sports Committee for the Joint Special Forces has won the Paramotor World Championship (Slalom), which was held in the Czech Republic.
During its participation in the tournament, the Qatari team succeeded in providing high technical levels that enabled it to win three medals (two golds and a silver), after winning a gold medal in the team competitions, the individual gold in the PL1 trek class, which was achieved by jumper Saeed Abdullah Al Marri and the silver medal which was won by the jumper Nayef Al Balushi, who came in second place in the Foot Launcher category.
The Qatari team delegation was headed by a member of the Qatar Air Sports Committee Hazza Hamad Al Attiyah. 38 pilots representing countries (Qatar, Poland, the Czech Republic, France, Spain, Latvia, Slovakia, Austria, Lithuania, Finland, Romania and the Netherlands) participated in the tournament.
The Qatari team participated in the tournament with a team consisting of Saeed Abdullah Al Marri, Hayan Al Ahbabi, Saeed Mullhia Al Marri, Nayef Al Balushi, Ibrahim Ahmed Al Banna, Fahd Al Hamad, Abdul Rahman Jawas and Issa Al Hajjaji.
HE Commander of the Joint Special Forces Staff, Chairman of the Qatar Air Sports Committee Brigadier General Jassim bin Ali Al Attiyah expressed his happiness with the honorable results achieved by the Qatari team in the tournament, considering that what was accomplished during the tournament is an achievement added to the record of achievements of the Qatar Air Sports Committee.
HE stressed that this achievement is the result of the great support that Qatari sports enjoy from the wise leadership in the country, and thanks to the patronage and follow-up of HE Deputy Prime Minister and Minister of State for Defense Affairs Dr. Khalid bin Mohammed Al Attiyah.
The Qatari national team participated in the tournament and its goal was to achieve outstanding results that confirm its high technical level and continuous development, and to obtain the first places and win the championship title, which was achieved thanks to the superiority of its distinguished elements, HE said, adding that the superiority of the Qatari national team over everyone was achieved thanks to the great support and care received by the Qatari team from state officials and the determination of the youth.
Member of the Qatar Air Sports Committee Hazza Hamad Al Attiyah  expressed his happiness with the team's achievement by winning three medals, which came after a strong competition between the participants for the first places. He stressed that this achievement was made thanks to the great support that the team finds and the determination of the heroes who were of good faith and were keen to raise the flag of Qatar in this high-level technical championship.
The Qatari national team performed well in the tournament and there was determination to compete vigorously, along with everyone's desire to win. The presence on the podiums is the biggest proof of the great work done by the Qatar Air Sports Committee to graduate distinguished jumpers and paramotor pilots, He added.
For his part, the captain of the Paramotor team and the gold medalist, Saeed Abdullah Al Marri said that the championship included a distinguished elite of pilots, and what was achieved is a unique achievement to continue the achievements made before. He stressed that the great achievement came only with the support of everyone, and said they dedicate this achievement to Qatar's sports.
Nayef Youssef Al Balushi, the silver medalist in the foot-launcher category, said that winning the silver medal was not an easy thing in light of the excitement and the strength of competition between the contestants. The race was a great struggle, so they achieved the goal and raised Qatar flag in the skies of the Czech Republic.
The Qatari team jumper Hayan Al Ahbabi said that winning more than one medal in this strong tournament is very important and a continuation of the team's series of achievements. The technical level of the tournament was high through competition and everyone's desire to win, but the Qatari team achieved the desired goal.