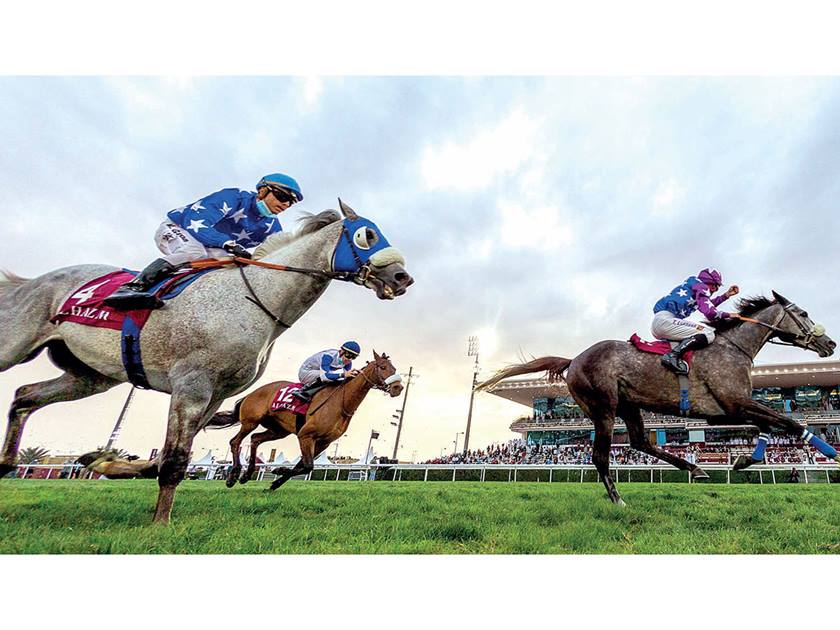 Doha, 18 September 2022 - Commercial Manager of Al Shaqab - a member of Qatar Foundation, and Vice-Chairman of the Organizing Committee Longines Hathab, Omar Al Mannai, confirmed that the Qatari equestrian events will be held during the FIFA World Cup Qatar 2022 tournament, held at the end of 2022, to promote the World Cup.
In an exclusive statement to Qatar News Agency (QNA), Al Mannai indicated that equestrian sport is one of the beloved sports, linked to the customs and traditions of many countries around the world and an aspect of tourism in the country. Qatari equestrian will have a strong presence in the World Cup through the organization of equestrian events, he added.
The Commercial Manager of Al Shaqab - a QF Member, pointed out that the distinguished international facilities in Al Shaqab will be open to visitors during the World Cup, especially since Al Shaqab is located in the vicinity of the World Cup Educational City Stadium. Al Shaqab pays great attention to Arabian horses. To achieve excellence in the field of equestrianism, which has gradually developed and is closely linked to the purebred horses in the State of Qatar, Al Shaqab seeks to lay down a set of foundations and controls to ensure the preservation of the countrys cultural heritage passed down by previous generations and work to pass it on to future generations, he said.
Al Shaqab is a leading global center in the world of horses, and is committed to the preservation of the Qatari heritage by promoting Arabian horses and reaching the highest levels in horse welfare, production, equestrian education, research, and development, with a commitment to developing and integrating its assets and human resources and optimizing it to achieve sustainability and positive interaction with the community, Al Mannai continued. All the advantages that Al Shaqab enjoys make it one of the aspects of tourism in the country that will have a major role during the World Cup, he stressed.
As for the sixth edition of Qatar Equestrian Tour Longines Hathab organized jointly by the Qatar Equestrian Federation and Al Shaqab, Al Mannai said that the championship is in continuous development and is witnessing a rise in the level of technical riders, evident in the riders' participation in the first two rounds of the championship this season. Many of the riders were perfectly prepared to participate in the tournament through external camps, in addition to buying new horses, which had a clear impact on the development and rise of the technical level and the intense competition to get on the podiums, especially in the middle and junior rounds, which witnessed large participation, he highlighted.
The Commercial Manager of Al Shaqab - a QF member, stressed that the equestrian schools within the State of Qatar are among the important tributaries of the Qatari national teams and local championships. The equestrian schools have had a clear impact on the increase in the number of riders in the current and previous seasons, which is evidence that the riders and their families are keen to develop their technical level, especially since equestrian is one of the sports that enjoy a great interest in the Qatari society.
Al Mannai explained that since the launch of the Tour Longines Hathab's first edition, it announced that participation is open to all nationalities from the Gulf and Arab countries, although many Gulf and Arab countries have local competitions that coincide with the date of the Qatar Equestrian Tour Longines Hathab championship.
He noted that the international tournaments organized by Al Shaqab annually will be held this season on time. He revealed that the development of local competitions to be organized by Al Shaqab for the riders of Al Shaqab Equestrian Academy, which will start in October and continue until the end of the season. Participation in the competition is available to the riders of the Equestrian Federation School and other schools for equestrian education.
At the conclusion of his statement to QNA, Al Mannai said that the Qatar Equestrian Tour Longines Hathab achieved its set goals. Every year, the organizing committee sets several goals that it seeks to achieve and in the past five editions, the tournament has achieved great successes that exceeded expectations and caused a huge boom in the Qatari equestrian.