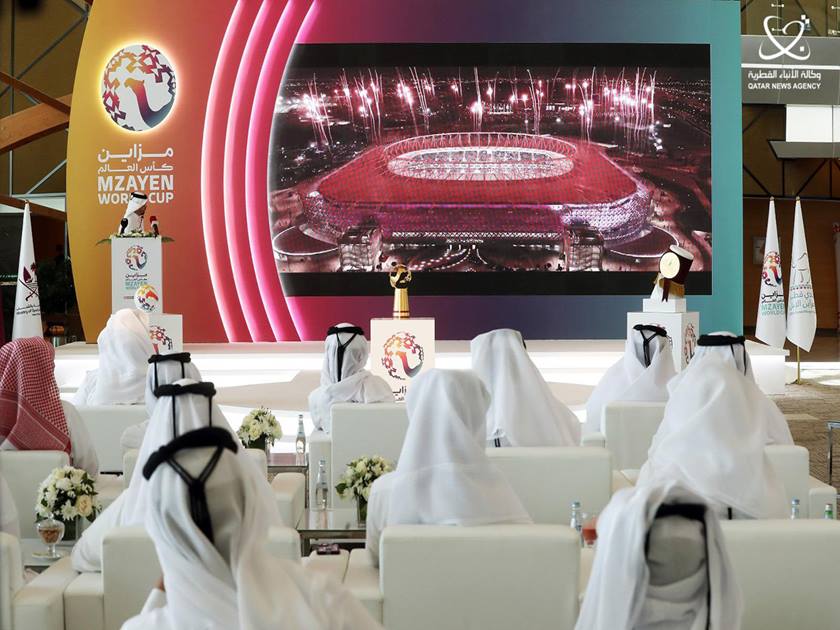 Doha, 20 September 2022 - The Qatar Camel Mzayen Club launched the new season (2022-2023), which included the Mzayen World Cup and the second edition of the Qatar Camel Festival "Gazilat Al-Ata" in the presence of a number of officials and camel owners.
This came at the ceremony held by the club on at the Lusail Sports Hall at the headquarters of the Ministry of Sports and Youth, during which he revealed the visual identity and the verbal logo of the Mzayen World Cup, in addition to other details.
The club is organizing the Mzayen World Cup on the sidelines of the FIFA World Cup Qatar 2022, believing in its national responsibility and the need to have an important role in the world's largest sporting event to be held on the soil of Qatar, and an active participation that reflects the culture, customs and traditions of the people of Qatar.
The World Cup will be held from November 24 to December 2, while the second edition of the Qatar Camel Festival (Gazilat Al-Ata) will kick off on January 28, 2023.
In his speech at the ceremony, President of Qatar Camel Mzayen Club Hamad bin Jaber Al Athba explained that he believes in the role of sport in bridging the distances between cultures, and its ability to break down barriers between peoples, considering that it is one of the soft powers of the State of Qatar used by the wise leadership to bring people closer and spread good among humans.
Al Athba said that the FIFA World Cup Qatar 2022 is within sight and Qataris are honored to organize the global event, welcome the world here in their country, and show them on the ground the noble and authentic meanings of our values, morals, customs and traditions, and the tolerance of our religion and culture openness to the other.
He added that the club will organize the World Cup on the sidelines of the Qatar World Cup, believing in its national responsibility and its important role in society, and its keenness to participate in this event and introduce World Cup fans to the sport of parents and grandparents with its values, ideals, customs and traditions that reflect the morals of our people, who have been known since ancient times for their good manners, generosity and humility.
Al Athba stressed that Qatar Camel Mzayen Club seeks to continue to improve the organization of this great sport, which has passed down from generation to generation, and set to be inherited by our children and grandchildren, based on the vision of the club to establish and organize Mzayen festivals in accordance with the highest standards and specifications.
At the end of his speech, the President of the Qatar Camel Mzayen Club stressed the need to turn the Qatar Camel Festival "Gazilat Al-Ata", which was inaugurated large and great, into one of the largest and most important stations for this sport regionally and internationally, during the second edition of the festival, which will be held in January 2023, praising at the same time the efforts of Qatari owners and their role in this regard.
During the ceremony, the Qatar Camel Mzayen Club inaugurated the verbal slogan "Desert Dhows" accompanying the Mzayen World Cup, as the slogan was derived from the symbolism of camels in Qatari history, as the Arabs called the camels an expressive description of desert dhows for their ability to cross deserts, their sand dunes that resemble the waves of the seas and the ability of ships to ride and cross them.
Just as the ships of the seas brought goods to the people of Qatar, the ships of the "camel" deserts at the time transported what the ships brought when they docked in the ports to all markets throughout the country.