Sanchez says Qatar will be at their best at World Cup 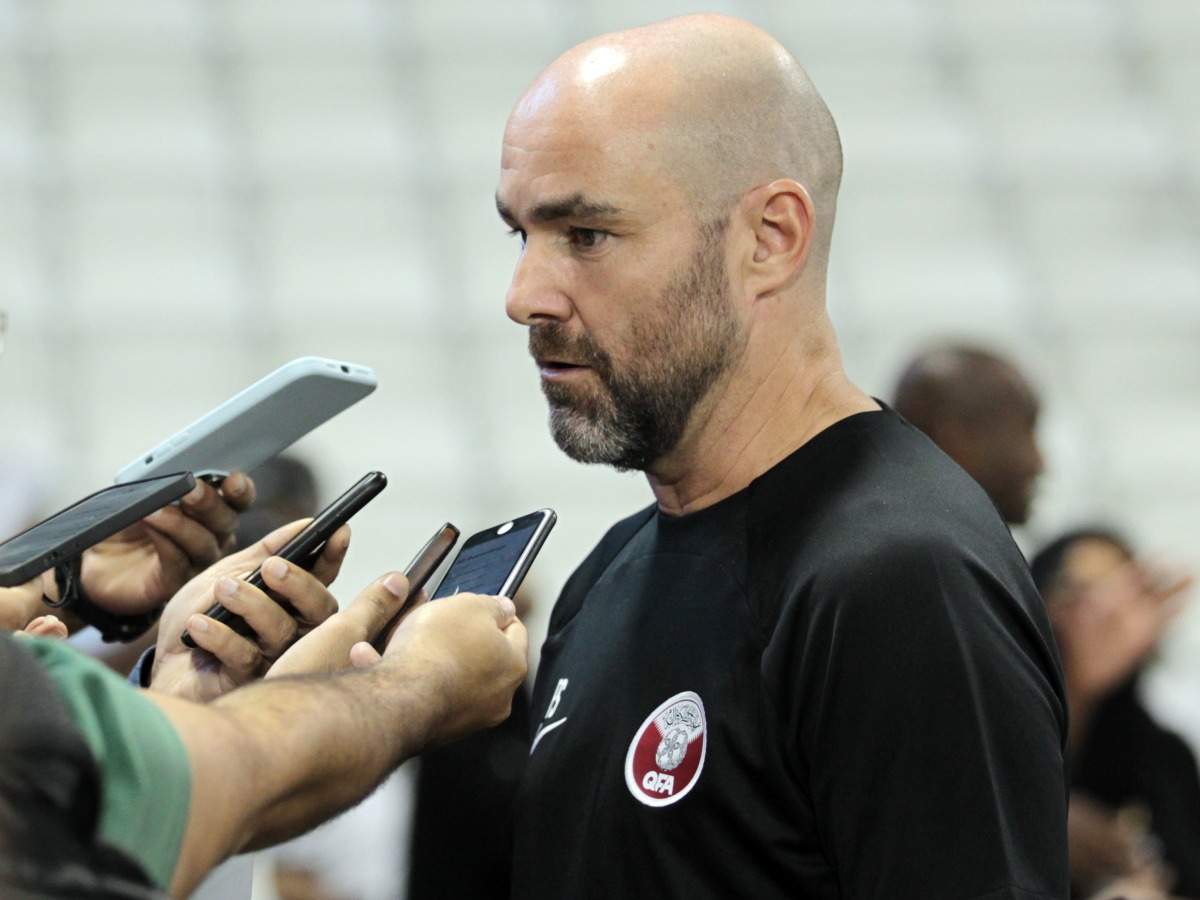 Doha, 3 October 2022 - Head coach Felix Sanchez believes Qatar will play their best football during the FIFA World Cup Qatar 2022 at home. Sanchez and his players got a sneak peek of what they will encounter during the World Cup as thousands of fans – young and old – thronged the Jassim Bin Hamad Stadium in Al Sadd on Sunday to watch the team’s open training session.
Qatar players only returned last week after a four-month training camp in Europe. They are here for a few more days before they travel to Marbella, Spain for the final phase of preparatory camp for the World Cup, which will begin with hosts taking on Ecuador at Al Bayt Stadium on November 20. They also play Senegal and the Netherlands in Group A.
Yesterday, the players were given a rousing reception as they took the field at reigning QNB Stars League champions Al Sadd’s home ground.
Captain Hassan al-Haydos and star striker Akram Afif were much in demand for selfies and autographs and the duo and rest of the team obliged the fans duly. The fans stayed back as the Asian Champions took the field for a training session.
Sanchez, meanwhile, said he expected Qatar to put in a much better performance than they have done in the recent past. The Al Annabi put in a below-par show in the two recent friendly matches.
They lost tamely to Canada 0-2 on September 23 at Villa Park in Vienna, before holding Chile to a 2-2 draw at the same venue four days later.
Sanchez said the intense and closed-door training sessions in Spain and Austria is just what the team needs ahead of their World Cup debut at home.
“It’s very nice to be back in Qatar. Yeah, it’s been a long time, but I think that’s what we had planned. And I think that was what was best for us, to be able to train in good weather conditions. So we are quite confident that it was a good preparation,” the Spaniard said.
“Every day we were preparing, trying to improve and hopefully we’re going to have a good last few days of preparation before the World Cup. And hopefully we’re going to be at our best level on November 20. The last two friendly games were obviously a test for us. Not every game you can perform at the level that you wish for, but I think in the second game we showed some improvements. When you play these competitive games, if you don’t start at your best level or you concede then it’s hard to come back into the game. So we need to learn from that. Hopefully we will not make that kind of mistake at the World Cup. We are confident to play at our best level,” the Qatar coach added.
Sanchez on Saturday named a 27-member Qatar squad for the third and final preparatory camp. While there are no more International friendlies scheduled, Qatar will play a few matches against local teams as they aim to be in the best shape for the World Cup.
“We’re going to keep training harder and try to improve on things that are not working. We need to always analyse our games and see what we can do to improve,” Sanchez, who led Qatar to maiden Asian Cup title in 2019, said.
The Spaniard also called on Qatar fans to rally behind their team during the World Cup.
“I think it will be a big occasion for the country. I hope people will enjoy the World Cup in Qatar. First time Qatar will play in the World Cup and it will be at home, so I think it’s unique. People have to enjoy these moments and I hope they will support us and cheer for the team and players. The players are going to appreciate that and give it their all to make the fans happy,” he said.