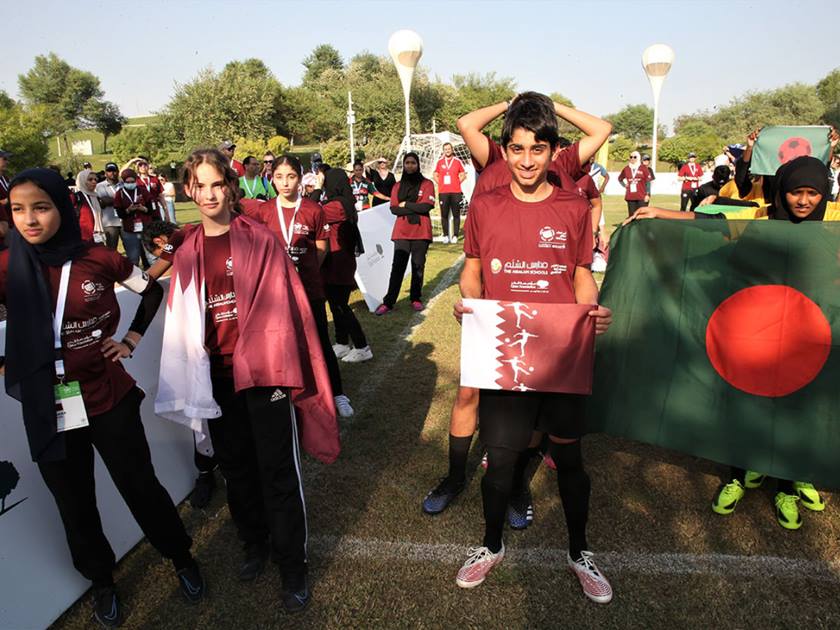 Doha, 12 October 2022 -  The matches of the 4th edition of the Street Child World Cup Doha 2022, which is held in partnership with Qatar Foundation for Education, Science and Community Development, kicked off today on the Oxygen Park stadiums in Education City, with the participation of 28 teams from 25 countries around the world.

15 teams of boys and 13 teams of girls will participate in the Street Child World Cup Doha 2022, including ten teams that include refugee or displaced children. The tournament will conclude with the final match next Saturday.

The teams were distributed into five groups (2 groups for females and 3 groups for males), and the draw resulted in the following: In the female category, the first group included teams (Qatar, Bolivia, Indonesia, Brazil, the Philippines, Colombia, Palestine), and the second group (Zimbabwe, Peru, Bangladesh, Mexico, India and America).

The Street Child World Cup Doha 2022 reflects the role of sport as a tool to bring about positive change and raise the voice of young people, regardless of their age, cultures and nationalities, and football is not just a game, but rather a way to enhance communication between individuals.

It aims also to shed light on the challenges that children from humble societies face, and the basic rights they lack, in addition to giving them a platform to drive positive change in their communities and beyond.

The Sports Programs Specialist at Qatar Foundation Hamad Saleh Al Shiba, praised the atmosphere in Oxygen Park playgrounds in Education City, with the presence of 28 teams from 25 countries from all over the world.

The sports program specialist at the Foundation added in a statement today that the World Cup features have begun to appear in Doha, and the Street Child World Cup will be held for the 4th season, a tournament that precedes the start of the FIFA World Cup Qatar 2022, The aim of the Street Child World Cup is to send messages of support to these community groups, and Qatar Foundation has been keen to enhance the participation of children in this tournament, which provides an opportunity for hundreds of participating youth.

For his part, the co-founder and CEO of Street Child United, the organizer of the Street Child World Cup Doha 2022 John Wroe, expressed his happiness with the atmosphere witnessed by the Oxygen Park in the Education City in which it is held. He stressed that football unites and does not differentiate, and this is one of the most important goals of this tournament, which has reached its 4th edition.

In an exclusive statement to Qatar News Agency (QNA), John Wroe added that the Street Child United uses the power of sport to change the negative way it sees the world and treats young people who have not been able to access education, which leads to their protection and support to build a life far from stay out of the classroom.

To conclude his statement, he explained that Street Child United seeks to organize several international sporting events for children to provide a stimulating environment for them to express their voice and provide arenas for equal play.

The Street Child World Cup is an initiative of a global movement that advocates for the protection of children living on the streets. The tournament is held to protect the rights of disadvantaged children from all over the world.