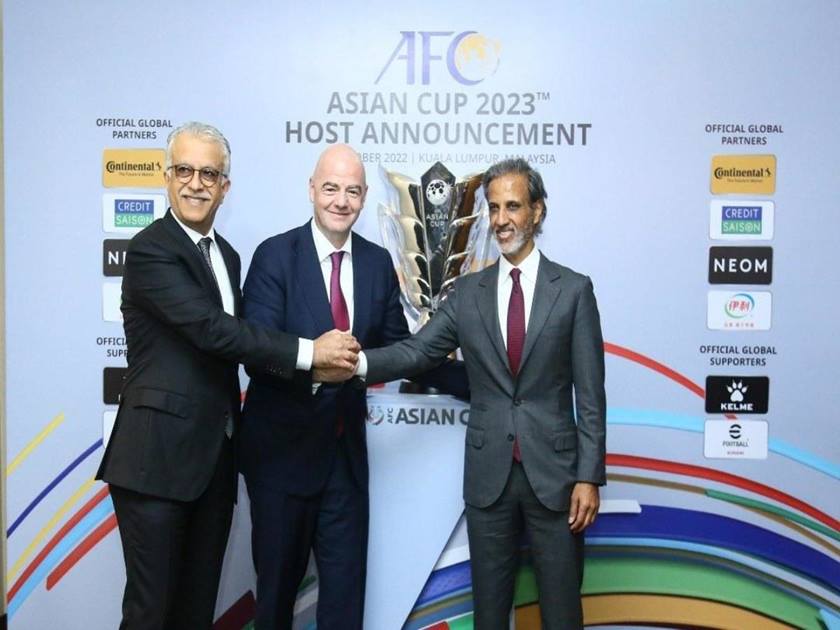 While congratulating Qatar Football Association and its President Sheikh Hamad bin Khalifa bin Ahmed Al Thani on winning the hosting rights for the AFC Asian Cup 2023, the AFC President said: “Qatar’s capabilities and track record in hosting major international sporting events and their meticulous attention to detail are well admired throughout the globe.”

“On behalf of the AFC and the Asian football family, I want to congratulate the Qatar Football Association on being awarded the hosting rights,” Shaikh Salman said during the 11th AFC Executive Committee meeting held in Kuala Lumpur, Malaysia, yesterday.

“Given the short lead time in preparation, we know that the hard work begins immediately but with their existing world-class infrastructure and unrivalled hosting capabilities, we are confident that Qatar will stage a worthy spectacle befitting the prestige and stature of Asia’s crown jewel,” Shaikh Salman said in the presence of FIFA President Gianni Infantino and the QFA President.

Qatar emerged as the winner over bids from South Korea and Indonesia after the original hosts China relinquished the rights earlier this year due to their zero-COVID policy while AFC reopened the bidding process.

Qatar, the hosts of the FIFA World Cup this year, have previously hosted the Asian Cup twice, in 1988 and 2011.

The last edition of the Asian football extravaganza was held in the United Arab Emirates in 2019 where Qatar emerged champions after defeating Japan 3-1 in the final.

Winning the hosting rights for the 2023 tournament also brings to a close the bid proposal of the QFA who were considered to have withdrawn from the 2027 race in accordance with the applicable bidding regulations.

The AFC Executive Committee also ratified the decisions of its Competitions Committee’s recommendation to award the hosting rights of the AFC U23 Asian Cup 2024 to Qatar.