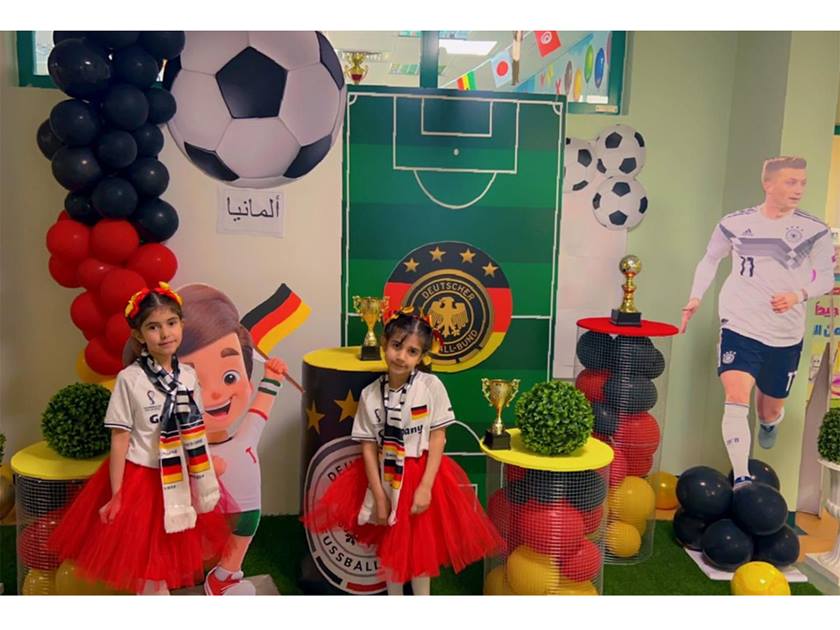 Doha, 23 October 2022 - Several state schools held Sunday events to introduce students to cultures of the countries participating in the FIFA World Cup Qatar 2022, as part of the Ministry of Education and Higher Education (MEHE)'s support for the state efforts in hosting the global sporting event.

During the events, the students learned about the civilizations, arts, heritage and the most important landmarks and peoples of the countries participating in the tournament. They also learned about their previous World Cup appearances, the trophies they claimed and their most prominent players.

The schools also reviewed the Qatari heritage, the old Qatari folk games, and other related heritage, cultural and civilizational activities.

Al Shorouk Model Independent School for Boys celebrated the cultures of the World Cup participants by organizing shows about the life of the ancient Qatari society in a special cultural corner that included heritage collectibles, folk games, traditional costumes, Bedouin customs and traditions, in addition to a football pitch.

The students presented their artistic talents by drawing and coloring their Qatari environment, embodying close interrelationship between the present and the past, as well as celebrating the heritage of some Arab countries, including pictures and models of their civilization and its most important landmarks.

Al Wakra Primary School's Childhood Department held an entertainment day to celebrate the World Cup participants' cultures. The school principal stressed that Qatar's hosting of this international event is a great achievement and a source of pride for the entire Arab world.

She also highlighted the generosity and hospitality of the people of Qatar and their welcome to the different cultures of the countries participating in the World Cup.

In the same context, Maymouna Primary Girls School's Early Education Department celebrated this cultural occasion, and prepared and implemented a comprehensive program on the cultures of the countries participating in the tournament. The program included introducing the students to those countries' cultures, which contributes to enhancing the students' knowledge, values, cultural and sports diversity, in addition to presentations on Qatari heritage.

Recently, the MEHE organized successful activities and events of the "Student World Cup 2022", which promoted the FIFA World Cup Qatar 2022, strengthening the national identity of students, and making them an important part of the tournament.