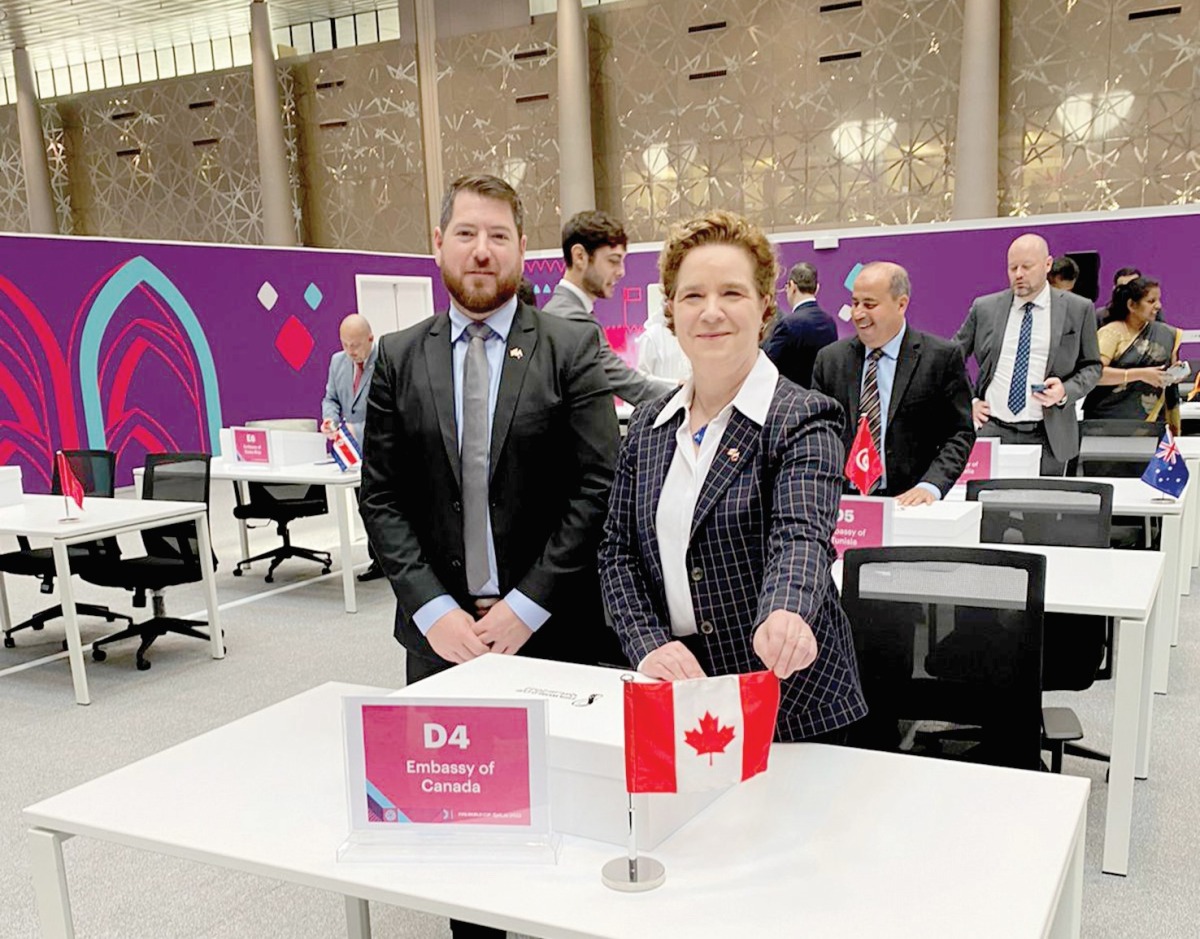 Doha, 8 November 2022 - HE Ambassador of Canada to the State of Qatar Isabelle Martin hailed Qatar's commitment to organizing the first carbon-neutral football World Cup, praising the decision of the International Federation of Association Football (FIFA) to choose Qatar to organize the 2022 FIFA World Cup.

In an exclusive statement to Qatar News Agency (QNA), HE the Canadian Ambassador said: "FIFA's choice of awarding the tournament to Qatar is commendable and sets an example for future big sporting events taking place elsewhere within the region. Increased tourism will be an important benefit."

"Qatar's commitment that it will organize the first carbon-neutral FIFA World Cup is particularly impressive. It is also encouraging that the Qatar Olympic Committee became signatory of the UNs 'Sports for Climate Actions' initiative, which commits it to reducing the overall climate impact of sports. This is good news for Qatar and the Middle East," HE the Ambassador added.

Her Excellency underlined that Qatar's small size will ensure a unique fan experience and the authorities are doing everything possible to ensure the infrastructure is in place to accommodate the numbers. "The completion of all the stadiums indicates that these preparations are on schedule, despite experiencing some slowdown because of Covid-19. One can only marvel at stadiums such as Al Bayt what an amazing design/architecture reflecting Qatars culture and history," she stressed.

HE Ambassador of Canada to the State of Qatar Isabelle Martin said that Canadians are very excited that their national team has qualified for the World Cup for a second time after a 36 year absence.

"Our results in World Cup 1986 in Mexico were modest. While FIFA World Cup 2022 sees Canada in Group F with Belgium, Croatia and Morocco all good teams I am optimistic that Alfonso Davies, Jonathan David and their teammates will put on a good show and reach the second round. And once you reach the knock-out stage, anything can happen," HE the Ambassador said.

"Football (or soccer, as we call it) has made huge strides in Canada since 1986, both at the grassroots level and professionally. Soccer is currently the largest participatory and the fastest growing sport in Canada, with nearly 1,000,000 registered active participants within 1,200 clubs that operate in 13 provincial/territorial member associations. Many Canadian players both male and female play professional football, including in Europe. Canadas most famous mens player is Alfonso Davies, a star player with German football giants Bayern Munich," she added.

"On the womens side, we have Christine Sinclair, captain of our Womens Team and current all-time international top goal scorer (men and women). Our Womens Team has enjoyed great successes; including winning the Gold Medal at last summers Olympic Games in Tokyo, after having won bronze already in the previous two Olympics," HE the Canadian Ambassador said.

"In all weather conditions (sunny, rainy or snowy), Canadian soccer fans have shown up to support our national team in large numbers during the teams successful qualification journey. They feel very proud of the teams achievements, and we expect many Canadians fans to come to Doha and join their fellow Canadians who already live here and continue to support Team Canada," she noted.

"Canada, Mexico and the USA are co-hosting FIFA World Cup 2026, the first time three countries will co-host, and the first time 48 teams will compete in a World Cup. As future hosts, we will be watching World Cup 2022 closely and will benefit from Qatar's experience. Best of luck to all 32 teams," HE the Canadian Ambassador added.