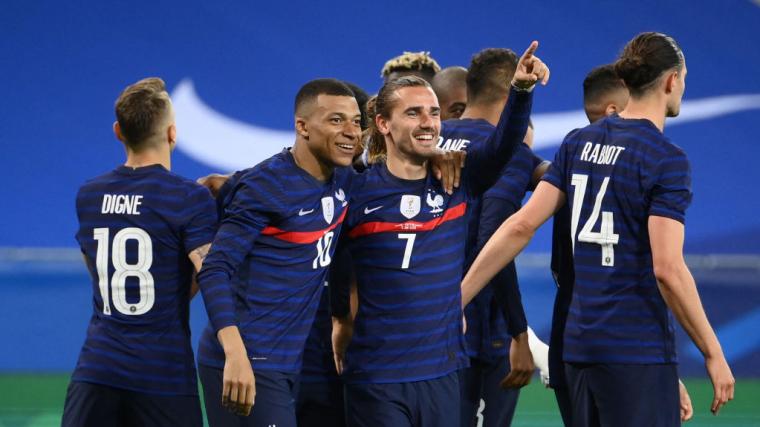 Doha, 9 November 2022 - The French team is still hungry for more success internationally, but they will need to put in some special performances if they are to win their second consecutive World Cup title and third overall when they take part in FIFA World Cup Qatar 2022 finals.
After the French national teams disastrous failure and exit from the second round against Switzerland in the Euro 2020 held last year, the teams mediocre results continued, which raises questions whether the champions can defend their title or even reach the semi-finals.
France coach Didier Deschampss task will be difficult in the World Cup in Qatar, in terms of finding the right balance in the squad following poor performances in order to turn things around.
France recently relied on a stable midfield consisting of Aurelien Tchouameni, Eduardo Camavinga, and Christopher Nkunku, which represents an ideal foundation for the attacking trio of Kylian Mbappe, Ousmane Dembele, and Karim Benzema.
Deschampss policy of rebuilding the squad will motivate all players to give their best in order to be part of the World Cup squad. This led to the emergence of promising talents that could contribute to France achieving a second consecutive World Cup title, joining Italy and Brazil as the only teams to do so.
The French team will start defending their World Cup title by facing Australia in the first matches of Group D at the Al-Janoub Stadium, followed by Denmark in their second match on Nov. 26 at the Stadium 974. They conclude their group-stage matches with a meeting in Tunisia team on Nov. 30 at the Education City Stadium.
The French Federation chose Al Messila Hotel as the teams headquarters during the tournament. They will train at Al-Sadd Club stadium.
France, the world cup champions, qualified for the FIFA World Cup Qatar 2022 after leading the fourth group of European qualifiers, which included Ukraine, Finland, Bosnia and Herzegovina, and Kazakhstan. They were unbeaten throughout the group stage. unbeaten. France had 18 points from winning five matches and drawing in three.
France, whose football federation was founded in 1919, is one of the oldest football teams in the World Cups history. France qualified for the finals on 16 editions and missed six editions.
France won the World Cup title twice. The first was against Brazil (3-0) when it hosted the tournament at home in the 1998 edition, and the second was 20 years later, against Croatia (4-2) at the World Cup Russia 2018.
France will appear in the Qatar World Cup for the 16th time in the World Cup finals after 1930, 1934, 1938, 1954, 1958, 1966, 1978, 1982, 1986, 1998, 2002, 2006, 2010, 2014, and 2018.
During their multiple participation in the most prominent global event in football, France managed to win the title twice in 1998 and 2018, the second place once in 2006, third place twice in 1958 and 1986, and fourth place once in 1982.
France played 66 matches in the World Cup finals during their previous 15 participations, during which they managed to achieve 34 victories, 13 draws, and 19 losses. They scored 120 goals and conceded 77 goals. At the European Football Championship level, the French national team has distinguished achievements during their 10 participations. They won the title in 1984 and 2000, and they came runners-up in 2016 and ranked fourth in 1960. France also qualified for the quarterfinals in 2004 and 2012, and for the quarterfinals in 2020, while they were eliminated from the group stages in 1992 and 2008. France played 43 matches in the European Football Championship finals during their 10 participations. They won 21 matches, drew 12, and lost 10. They scored 69 goals and conceded 50.
French football introduced a host of stars to the game. The 1958 World Cup saw players like Raymond Kopa and Just Fontaine, then came Michel Platini, Tigana, and Alain Giresse. France also introduced other players like Thierry Henry (Frances top scorer for France in history with 51 goals), Lilian Thuram (the owner of the most participation with 142 participation), and Zinedine Zidane (who gave France its first World Cup title and its second European title in 2000).
More recently, Kylian Mbappe, is the second youngest player after Pele to score in the World Cup final, Griezmann, Karim Benzema, Kante, Pogba, Osman Dembele, goalkeeper Hugo Lloris, and others, who helped France win its second World Cup title in 2018.