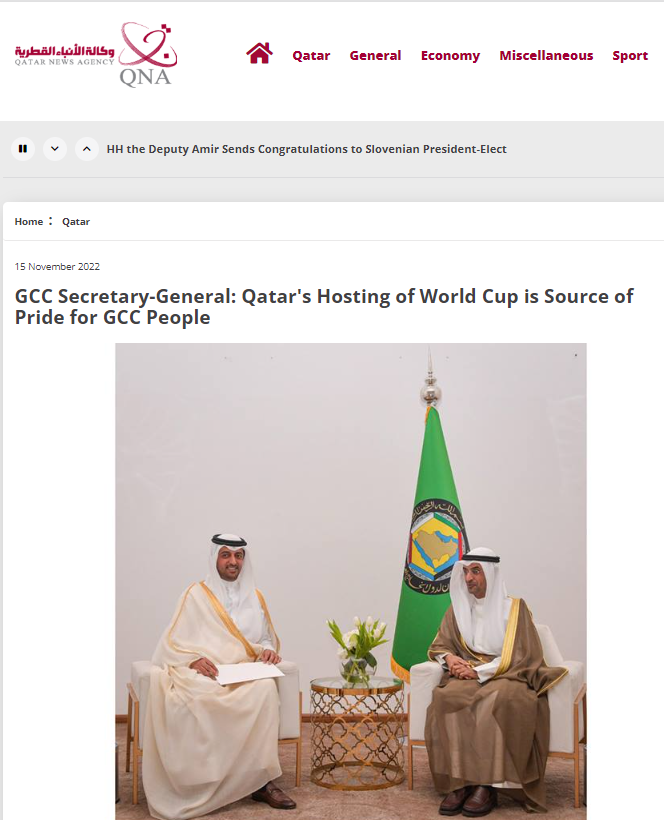 During his meeting with HE Ambassador of the State of Qatar to the Kingdom of Saudi Arabia Bandar bin Mohammed Al Attiyah, His Excellency pointed out that the Qatar World Cup represents a new Gulf achievement that demonstrates the ability of Gulf talent to achieve ambitions in all fields, in line with the directives of their Majesties and Highnesses, the leaders of the Gulf Cooperation Council countries, expressing his confidence that the World Cup in Qatar will be a distinguished historical version.

His Excellency said that the world is on a date with an exceptional version that will be a milestone in the history of the most prominent football championship in the world, adding that the whole world is following with reverence the distinguished preparations made by the State of Qatar for the launch of the tournament.

HE Dr. Al Hajraf indicated that the event is the first of its kind in the Gulf and Arab region, noting the great potential that the State of Qatar has harnessed to make the tournament a success.

His Excellency also valued the achievements of the joint Gulf action process, and the great efforts made by the GCC countries to enhance their gains, affirming that the care that the GCC march receives from their Majesties and Highnesses, the leaders of the GCC states, represents the main support for the General Secretariat to work to achieve everything that enhances and supports the councils march and serves its states and citizens.