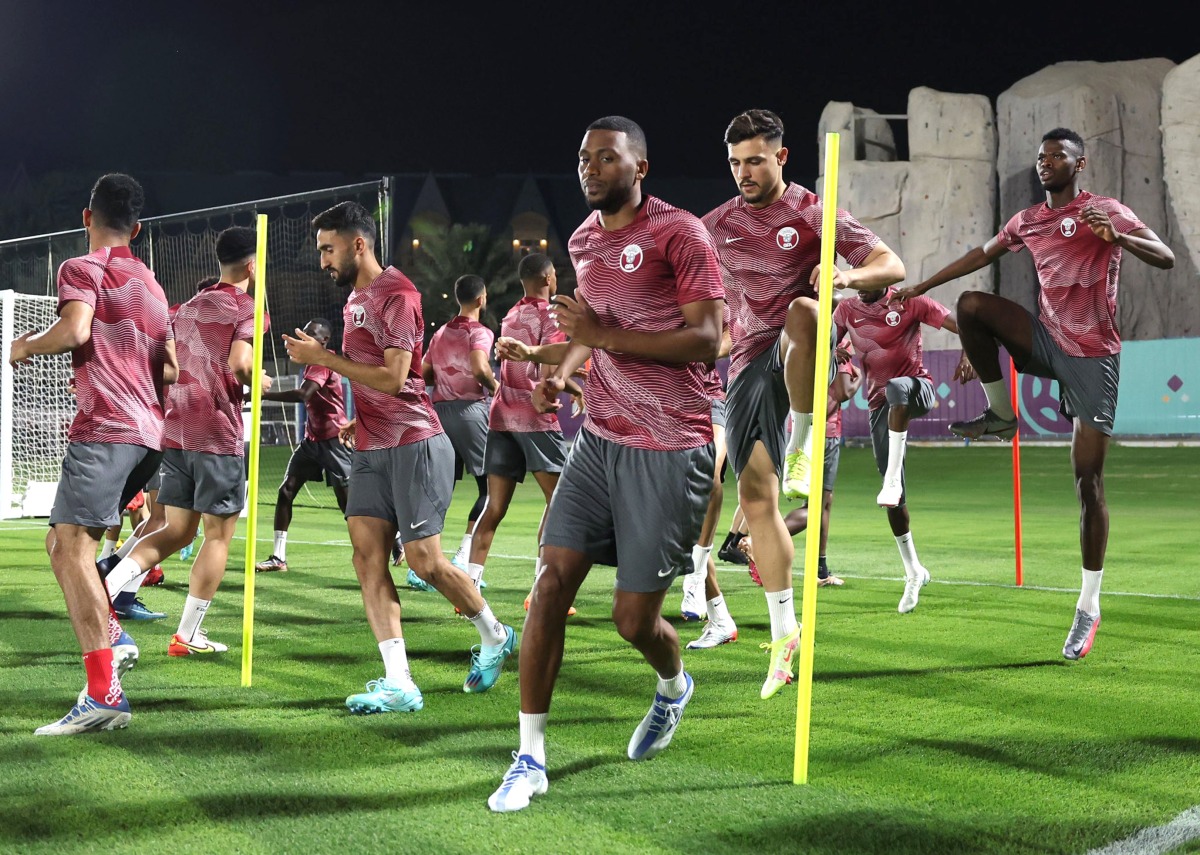 Doha, 19 November 2022 - Thousands of fans flocked to the iconic places of Qatar at the weekend relishing the start of historic FIFA World Cup, which kicks off tomorrow.

Away from all the noisy celebrations, Al Annabi were focused in their closed training session as they gear up for their debut match against Ecuador at the Al Bayt Stadium.

Barring a short event where young fans met Qatari players to express their support for the national team, the Felix Sanchez’s side remained busy in their training drills for the fourth consecutive day at the Aspire Training Facility, yesterday.

Both Qatar and Ecuador are aware that winning the opening match would be crucial in their bid to go through Group A that also includes title contenders Netherlands and African champions Senegal.

“Ecuador are a strong team. The team has talented players with a lot of ambition,” Sanchez had said earlier.

“The first game in any tournament is important. We are focused on Ecuador and we are looking forward to a strong performance in our first World Cup match.”

Sanchez is expected to field his experienced players against Ecuador with goalkeeper Saad Al Sheeb, Karim Boudiaf and Abdelkarim Hassan likely to be in starting XI, with captain Hassan Al Haydos, Akram Afif and Almoez Ali leading the attack.

The home side has been preparing for the tournament for over four months during their training camps in Spain and Austria, where they also played a number of friendly matches.

Meanwhile, Qatar’s Ismaeel Mohammad has said victories in the last five friendly matches have give team confidence ahead of Ecuador match. The reigning Asian champions defeated Albania, Nicaragua, Guatemala, Honduras and Panama in Marbella before returning home on November 14.

“These victories before the World Cup are important. They were good sides and importantly these last few games helped us to prepare for Ecuador better,” said the midfielder.

“We have been preparing for the World Cup for many years. We had very good preparation for the World Cup in the last four months. Every member of the team is focused and ready to give his 100 percent. We want to win against Ecuador to make history,” he added.

“We will take one match at a time. The team will play every match to win so we can march into the knockout stage. We are well prepared and I think we have the ability to reach the Round of 16.”

Ismaeel added fans will play the role of a star team member during Qatar’s matches at the World Cup.

“Our fans are like a key player of the team. They helped us claim third position in the FIFA Arab Cup and we will wait for them in our matches at the World Cup too. Their support will be the key to us,” he noted.

Ismail, who played his first match for the national team in 2013, said it was an honour to represent his country in the World Cup.

“The feeling cannot be described in words. It’s like a dream come true, playing the first-ever World Cup to be held in the Middle East and the Arab world for your country. I am looking forward to play my part in getting desired results,” he said.

Qatar will play their second match against Senegal on November 25 at Al Thumama Stadium and will return to Al Bayt Stadium to face the Netherlands in their last group match four days later.