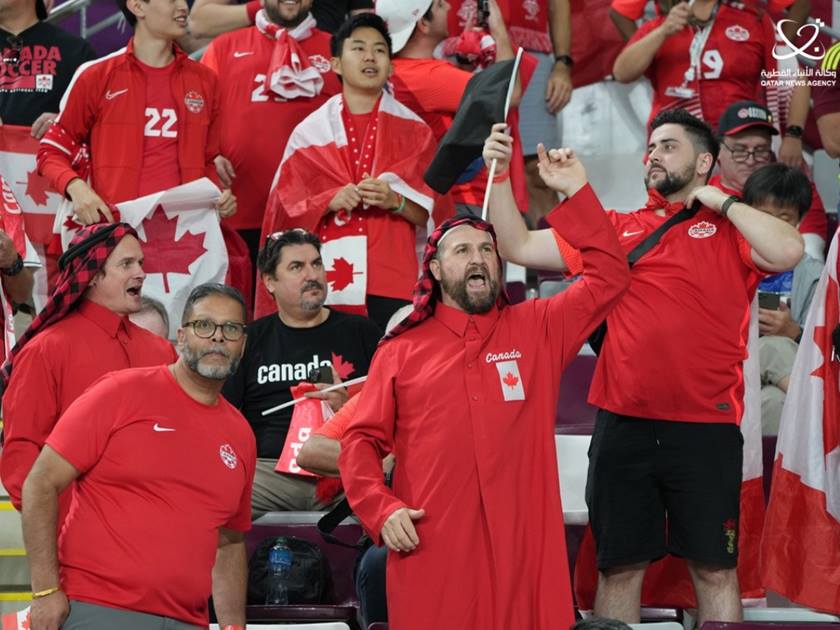 Doha, 28 November 2022 - In their statements to Qatar News Agency (QNA), many supporters of the Canadian national team expressed their happiness with the team's presence in this World Cup.

Canadian journalist Elizabeth Salion confirmed that Canada's presence in the World Cup is a huge achievement, especially after a long absence that lasted more than 36 years, specifically since its first appearance in the 1986 World Cup in Mexico.

Elizabeth, who works for a Canadian news agency, said: "We are pleased with the Canadian team's presence in the World Cup, and there are large numbers of fans who came to Qatar to follow the team that presented heroic matches in the CONCACAF qualifiers, starting with goalkeeper Milan Borjan, to the great player Alphonso Davies, and Jonathan David and we've been waiting a long time to get back to the World Cup."

She added: "We are happy with our national team, we know that they are playing under pressure, but nevertheless there are many young players who represent the hope of football in Canada and we are proud of what they have done." For her part, Canadian journalist Nora Stankovic at Soccer media corporation in Canada expressed her great passion for the Canadian team's participation in the tournament, in its second appearance, more than three decades after its first participation in the World Cup in Mexico in 1986, and said: "In the World Cup qualifiers, everyone was certain that they will not see the national team in the World Cup before the 2026 edition when Canada participates in organizing it alongside the United States of America and Mexico, but coach John Herdman and all the players overturned expectations." The Canadian journalist pointed out that the Moroccan team presented great levels, and therefore the task will not be easy for this team, believing that the Moroccan team will do a good job in this tournament." For his part, Michael Ricky, a Canadian journalist of Kenyan origin who works on a sports website in his country and was keen to come to Qatar to cover Canad's matches and the atmosphere through social media platforms, confirmed that he visited several stadiums and was impressed by the specificity of its design, but he was sad for Canada loss against the Croatian team.

He added: "Away from the hustle and bustle of football, I was keen not to miss the opportunity and visit some areas, including Sealine, Katara Cultural Village and Souq Waqif." In this regard, Manuela Chesky, a photographer in a Canadian sports newspaper, considered that she was keen during her stay in Qatar to visit the eight stadiums to cover the World Cup atmosphere and take rare shots of international football stars.

She added, "I know very well what it means for Qatar to host the World Cup, as it has many implications and a great impact on many aspects of the country, and will leave a tremendous legacy for many years, and I felt that between my first visit to Qatar several years ago and with this visit, there are many things that has changed, and in Canada, which will host the next edition of the World Cup along with the United States and Mexico in 2026, everyone is sure that there are many positive things that will be achieved in the country, and since receiving the honor of organizing this event, everyone is waiting for this decisive moment."