Queiroz: We Play to Defeat USA 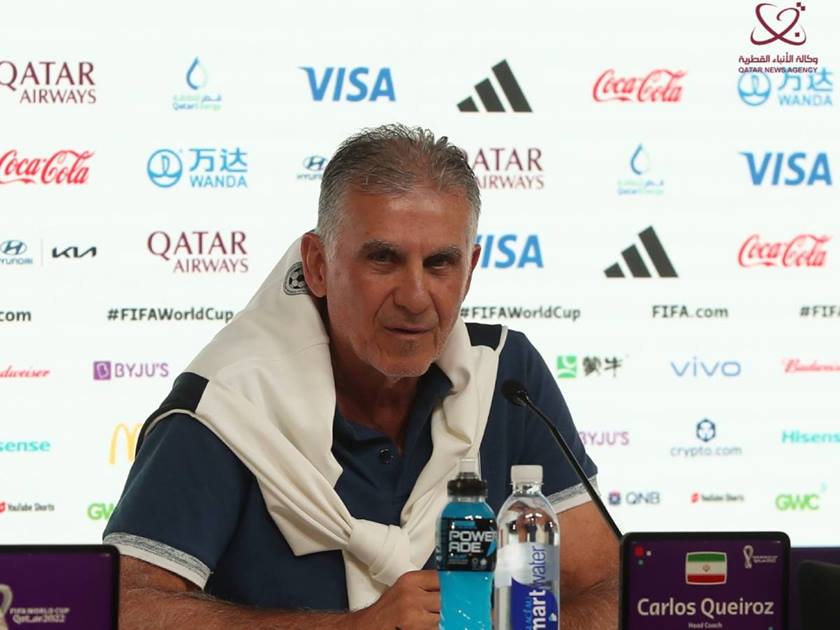 Doha, 28 November 2022 - The Portuguese coach of the Iranian national team Carlos Queiroz said that he will leave issues aside as his team prepares to play against its US counterpart on Tuesday (tomorrow) in the third and final round of Group B in the FIFA World Cup Qatar 2022, pointing out that the game will be exceptional and that the Iranian team (Team Melli) will play the game with a will to win and qualify for the round of 16.
In an official press conference held Monday for the Iran vs. US match, Queiroz said that he will not be focusing on side issues, but rather on the game, adding that the most important thing for the team is to put on a great performance on the field.
Team Melli's task tomorrow is to entertain the football fans during the 90-minute match and give everything they have to win and qualify for the next round for the first time in Iran's history, especially since US had already achieved this in the 1994 World Cup, he said.
Queiroz indicated that tomorrow's match will be exceptional, especially in light of his being the coach of the Iranian national team for the third time in the World Cup finals, pointing out that the game will not be easy considering the US team's strong performance in its first two matches against Wales and England.
Queiroz also expressed his hopes that both teams will put on a great and strong performance in tomorrow's match.
For his part, Iranian team's player Karim Ansarifard stressed his team-mates' determination to do their best to win and qualify for the round of the 16, and spread joy among the Iranian people, noting that the team was able to return and improve its performance after its defeat to England - resulting in its victory against Wales.
Ansarifard said that tomorrow's match will be the decisive game of qualifying his country for the round of 16, which is Team Melli's dream that they have been striving to achieve since they arrived in Qatar.
He also pointed out the players' readiness, unity and solidarity, as well as the prayers of the Iranian people, aspiring to repeat its last victory to write history by defeating US.