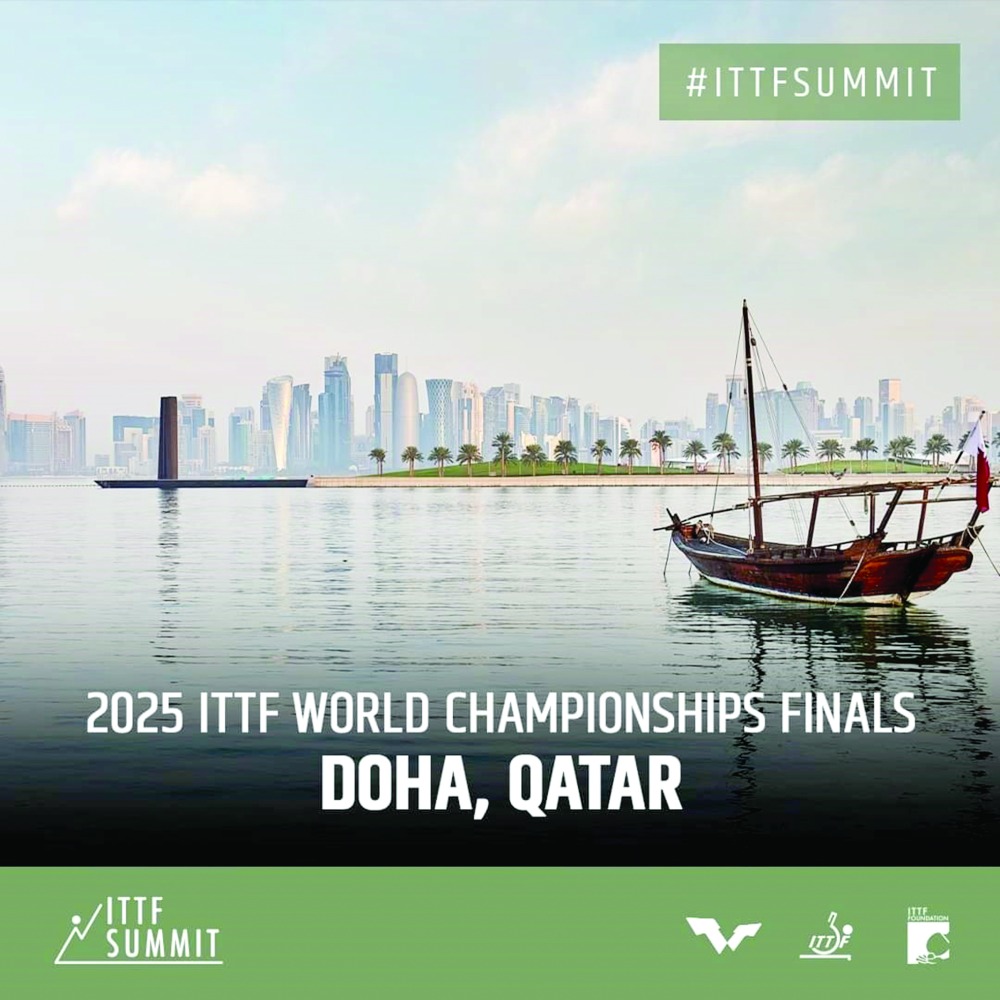 Doha, 8 December 2022 - Qatar has won the honor of hosting the 59th edition of the 2025 World Table Tennis Championship during the General Assembly meeting of the International Table Tennis Federation (ITF), which was held in Amman, Jordan, over three days in the presence of 227 member federations.

This is the second time that Qatar has won the hosting of the World Table Tennis Championship after the 2004 edition, which achieved very great successes technically and organizationally.

Doha received 57 votes against 39 for the other Spanish candidate city of Alicante during the vote of the member federations to choose the host city on the sidelines of the FIFA General Assembly meeting.

Qatar's choice to host the largest international event in table tennis comes after it has recently established itself as a key location and launching pad for a new era in this game, after hosting the most prominent international table tennis tournaments, which achieved great success, and perhaps the most recent of which was hosting five major sporting events of world table tennis over the past month of March for the first time in the history of the game.

This comes as a clear indication of the confidence that the Qatar Table Tennis Association has in the ITF, in addition to the accumulation of experience among Qatari administrative cadres who are characterized by the necessary professionalism and the ability to make major global hosting a success.

These tournaments witnessed the participation of world stars of the game, and Doha became the world sports capital par excellence. It has become the center of major sporting events for almost three decades.

The Qatar Table Tennis Association officially submitted the candidacy file to host the 2025 World Table Tennis Championships last July, to be the second time to host the world championship in Qatar after the 2004 edition, which achieved great success.

Throughout the history of the world championships, no Arab country has hosted the tournament except Egypt in 1939, and it was the second time in Qatar.

This edition of the World Table Tennis Championship will be exceptional as it will be the last tournament before the huge celebration organized by the ITF in 2026, in the British capital, London, to celebrate its 100th anniversary.

President of the Asian Table Tennis Union and ITTF Executive Vice President, and chairman of the file submission committee, Khalil Al Mohannadi expressed his great happiness at Qatar's winning the honor of hosting the 2025 World Championship.

Al Mohannadi said in a statement today that the timing of the announcement of Qatar's winning the hosting coincided with the great successes of the 2022 football World Cup, which is heartening and confirms that Qatar is moving in the right direction at the sporting level in all games, not just in football.

He underlined that this is the second time historically that Qatar has been honored to host the largest and most important global event in the field of the game after the 2004 edition, which achieved very great successes from a technical and organizational point of view.

Al Mohannadi added that Qatar received great confidence from the member federations of the General Assembly of the ITF, by obtaining 57 votes to 39 for the Spanish city of Alicante.

He continued that from the beginning, Qatar found a strong competition to host this particular edition, which is historic, as it precedes the huge celebration that will be organized by the ITF in 2026 on the occasion of the golden jubilee of the 100th anniversary of the founding of the federation, noting that many countries applied for hosting, and all of them are old countries in the game, friendly, and Qatar has a special relationship with all of  them, and the competition was heated.

He said that Qatar relies on the services provided to the world of table tennis and promised everyone a special organization for the event, and Qatar's file was admired and won the confidence of the members, thanks to the great potential of the State of Qatar in terms of infrastructure and logistical capabilities at the highest level, he explained.

Al Mohannadi underscored that throughout the history of the world championships, no Arab country has hosted the tournament except Egypt 83 years ago, specifically in 1939, and the second time was in Qatar in 2004.

He promised a historic and exceptional edition of this tournament, stressing that Qatar always welcomes everyone to Doha, and everyone will live an organizational atmosphere that has not been seen before throughout the history of the world championships of the game.