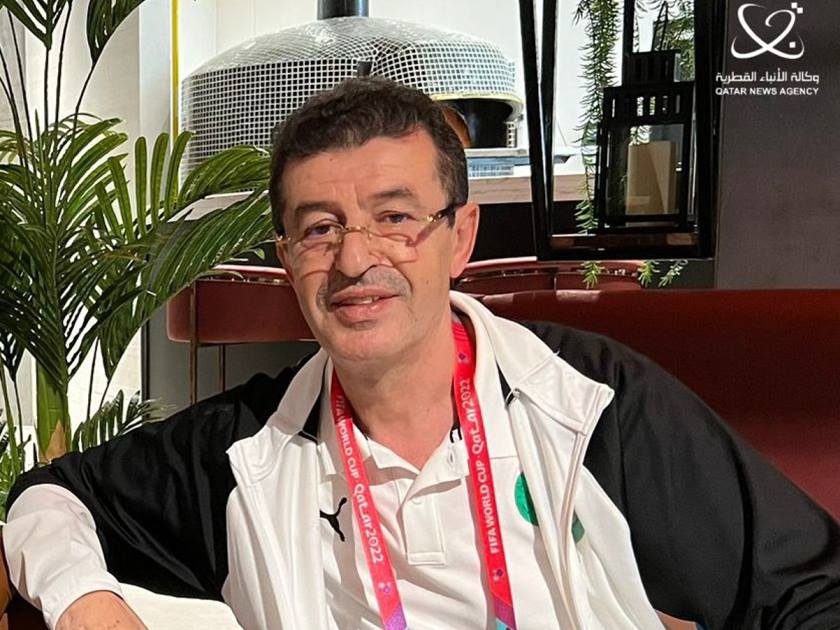 Doha, 9 December 2022 - The head of the Moroccan national team's delegation to the FIFA World Cup Qatar 2022 and member of the Royal Moroccan Football Federation Abdelmalek Abroun, confirmed that the ambitions of his country have no limits after reaching the quarter-finals to play against the Portuguese national team on Saturday at Al Thumama Stadium.
In an exclusive interview with Qatar News Agency (QNA), the head of the Moroccan delegation said: "We have succeeded in outperforming teams that have a long history in football, and after we defeated the world champion Spain in the 2010 edition, there is no longer a ceiling for our ambitions, and our goal in the first place is to reach the final match." He added, "The Moroccan national team has already reached the round of sixteen in the 1986 World Cup in Mexico, but in the 22nd edition of the World Cup it was able to accomplish a tremendous achievement by overcoming this barrier and reaching the quarter-finals, and presented an honorable image of Arab and African football." He continued, "A mission awaits us in front of the Portuguese national team, and we hope to succeed in it." He pointed out that the Moroccan national team expresses great gratitude to the State of Qatar for the great support and standing by the national team during the matches it played, praising the follow-up of HH the Amir Sheikh Tamim bin Hamad Al-Thani to all matches of the national team, as well as HH the Father Amir Sheikh Hamad bin Khalifa Al-Thani and HH Sheikha Moza bint Nasser for their support and good feelings with the team's victories.
Abroun said, "Undoubtedly, Qatar's hosting of the World Cup gave great value to the Arabs and honored them, and everyone witnessed a huge superiority over many European countries that had previously organized the World Cup, by providing advanced infrastructure and good facilities befitting the size of the global event." He added, "We thank the government and people of Qatar for this organization, as they presented a good and wonderful image of the Arab world, and gave the world a good example of organizing the World Cup at the highest level, and great efforts have been made in the infrastructure so that the World Cup will be an exceptional and pioneering version." He pointed out that everyone in Morocco stands behind the national team adding that the Arab teams performed well in this World Cup.