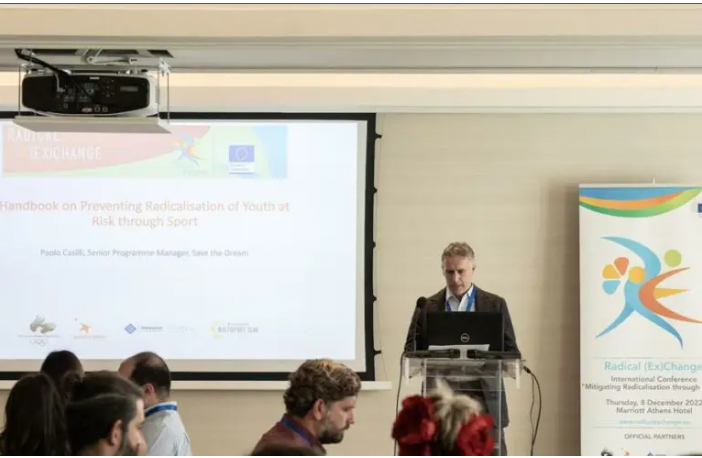 Athens, Greece, 14 December 2022 - The final conference of the Radical (Ex) Change project, under the theme “Mitigating Radicalisation through Sport", took place on 8 December 2022, in Athens, Greece, organised by the International Olympic Truce Centre.

The conference was organized within the framework of ‘Network for the exchange of good practices on the integration of youngsters at risk of radicalisation through sport’ (Radical (Ex)Change) project. Radical (Ex) Change is a two-year Preparatory Action funded by the European Commission Directorate-General for Education and Culture – Unit C4 (Sport), which aims at developing a collaborative network amongst the organisations working on Sport for Development and Peace and those engaged in the prevention of marginalisation and radicalisation.

Additionally, the International Olympic Truce Centre and its partners supporting the project presented the “Handbook on Preventing Radicalisation of Youth at Risk Through Sport”, one of the Programme’s deliverables.

Lastly, the International Olympic Truce Centre announced the launch of the Radical (Ex)Change Network, and invited all participants to join forces in order to continue the efforts of tackling this challenging and evolving phenomenon, focusing on educating the youth, creating awareness and bringing change globally.

Radical (Ex) Change project is coordinated by the International Olympic Truce Centre, with the support and collaboration of the University of the Balearic Islands, Save the Dream and the European Multisport Clubs Association.

Dr. Constantinos Filis, Director, International Truce Centre, mentioned that: “While radicalisation is not a new phenomenon, the trends, means and patterns of radicalisation evolve, and responses have to be adapted. The more we get used to it, the more difficult it becomes to tackle such phenomena. We can use sport, in programmes, especially educational ones, to make those programmes more attractive and easier for young children to learn from. Sport, as a powerful platform, can contribute significantly to the gradual building of a Culture of Peace. We aim to embrace the young generation to instill sport and the ideals of peace, as a part of their everyday life.”

Paolo Casilli, Senior Manager, Save the Dream said: “It is important to demystify the term radicalisation and promote the exposure of the community to different point of views: this is beneficial and fosters diversity as means to enrich rather than divide. Sport generates goodwill and the role of the community in promoting sport-based programmes for vulnerable young people is an effective strategy for creating belonging and preventing radicalisation.”

Prof. Alejandro García Mas, Universitat de les Illes Balears, said: “Perhaps it is more interesting to focus on protective factors than risk factors, in order to learn from people who have not been radicalized."

Gabriella Bascelli, Project Manager, European Multisport Club Association, said: “The Radical Exchange Conference was an important moment to exchange ideas and learn from each other. This was an effective way to understand what we as Europeans can do to facilitate integration.”