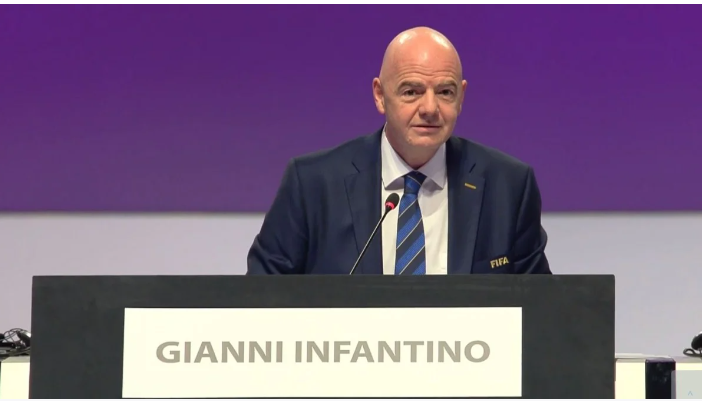 Doha, 17 December 2022 - FIFA President Gianni Infantino said that the FIFA World Cup Qatar 2022 was the best World Cup edition ever, adding that it succeeded in uniting the world.
Infantino held a press conference today and said that the World Cup was successful on all fronts, with no hooliganism, stressing that it was the best edition. He also said that the World Cup provided many fans with the opportunity to find out about the State of Qatar and the Arab culture.
He said that the success of the competition was evident by the more than 3.27 million who attended matches in the stadium. He also said that the match between Argentina and Mexico had the highest attendance, with 88,966 people in the stands.
Infantino noted that five billion people around the world watch the FIFA World Cup Qatar 2022. He expressed his delight with the milestone reached by the African content this year after Morocco became the first African team to reach the semi final.
World Cup revenues increased by $1 billion from the previous edition to a total of $7 billion, Infantino added. FIFA President Gianni Infantino indicated that that nearly 1.7 million fans attended the FIFA Fan Festival (FFF).
He added that 62 matches were played so far without incidents in a very joyful atmosphere and that's what should be bare in mind. 163 goals were scored so far, which is similar to the number of goals scored in World Cup Russia 2018.
He praised Morocco's national team outstanding performance and their achievement reaching the semi-finals. He congratulated the Moroccan team for their achievement, saying that this is the first time ever an Arab team reaches the semi-finals. He also pointed out that the tournament witnessed, for the first time ever, a woman who refereed a match as women from Costa Rica, France, and Germany took part and they did very well.
On the other hand, he added that 2.3 million Hayya Cards were issued, where the top five visiting countries were Saudi Arabia, India, the USA, the UK, and Mexico, indicating that the FIFA will issue the tournament's final viewing and audience figures after the final match.
FIFA President also expressed his content in the role played by the volunteers during the tournament saying that the FIFA received 400,000 World Cup volunteering applications, where 20,000 were selected from various countries, adding that two matches are still to go and everyone should remain focused till the end.
Infantino stressed that FIFA World Cup Qatar 2022 would leave a significant legacy represented in the fans' and visitors' exploration of the Arab world which they have not seen before and discovering the Qatari people who welcomed so many fans from all over the globe with open doors.
He said that the legacy that matters the most is welcoming people and that we all discovered that what had been said and perceived earlier was not true and that you could enjoy your stay in Qatar and get to meet different people and know them better is really important.
He said that the biggest fears were the issues of safety and security during the tournament and that FIFA did not know the fans' reaction before the tournament, but they saw that the people had positive reactions to the tournament and no incident was encountered which is something unique.
He added that FIFA is looking ahead to the final match and asking everyone to stay focused, praising the exception and beauty of this World Cup edition and the legacy it will leave behind.
Infantino stressed that the impressive success of the FIFA World Cup Qatar 2022 Group stage - when everyone held their breath till the last second to know who would qualify from the third round made FIFA reconsider the Group stage division during the World Cup 2026, which will include 48 national teams for the first time.