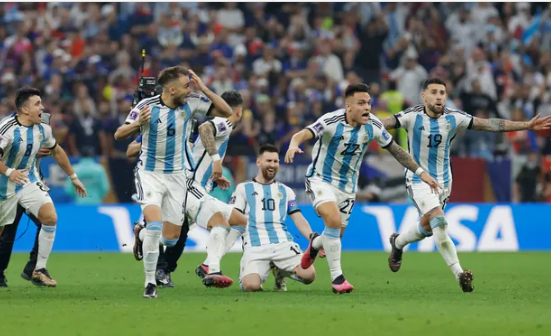 Doha, 18 December 2022 - Argentina defeated France with a win of 4-3 on penalties and gave Argentina glory after 36 years.

The first half of the match witnessed two goals scored by Argentina. Lionel Messi successfully converted a penalty kick in the 23rd minute of the match and scored the first goal of the match.

Angel Di Maria scored the second goal for Argentina in the 36th minute of the match.

The second half of the match witnessed two goals from France scored by Kylian Mbappé in the 80th and 81st minutes of the match.

Lionel Messi scored the third goal for Argentina in the 109th minute, which was part of the additional time provided.

The match moved into a penalty shoot-out as the score reached 3-3.

Argentina won in the penalty shoot-out with the first goal by Messi, followed by Paulo Dybala and Leandro Paredes, and the winning goal was scored by Geonzalo Montiel.

Argentina set a record in the tournament as being the first to score in all seven of their matches at the Qatar 2022 tournament.

Lionel Messi won the title of the Player of the match.

Adding to Argentina's records, Lionel Scaloni, coach of Argentina, has become the youngest coach to win the FIFA World Cup at the age of 44 years and 216 days.