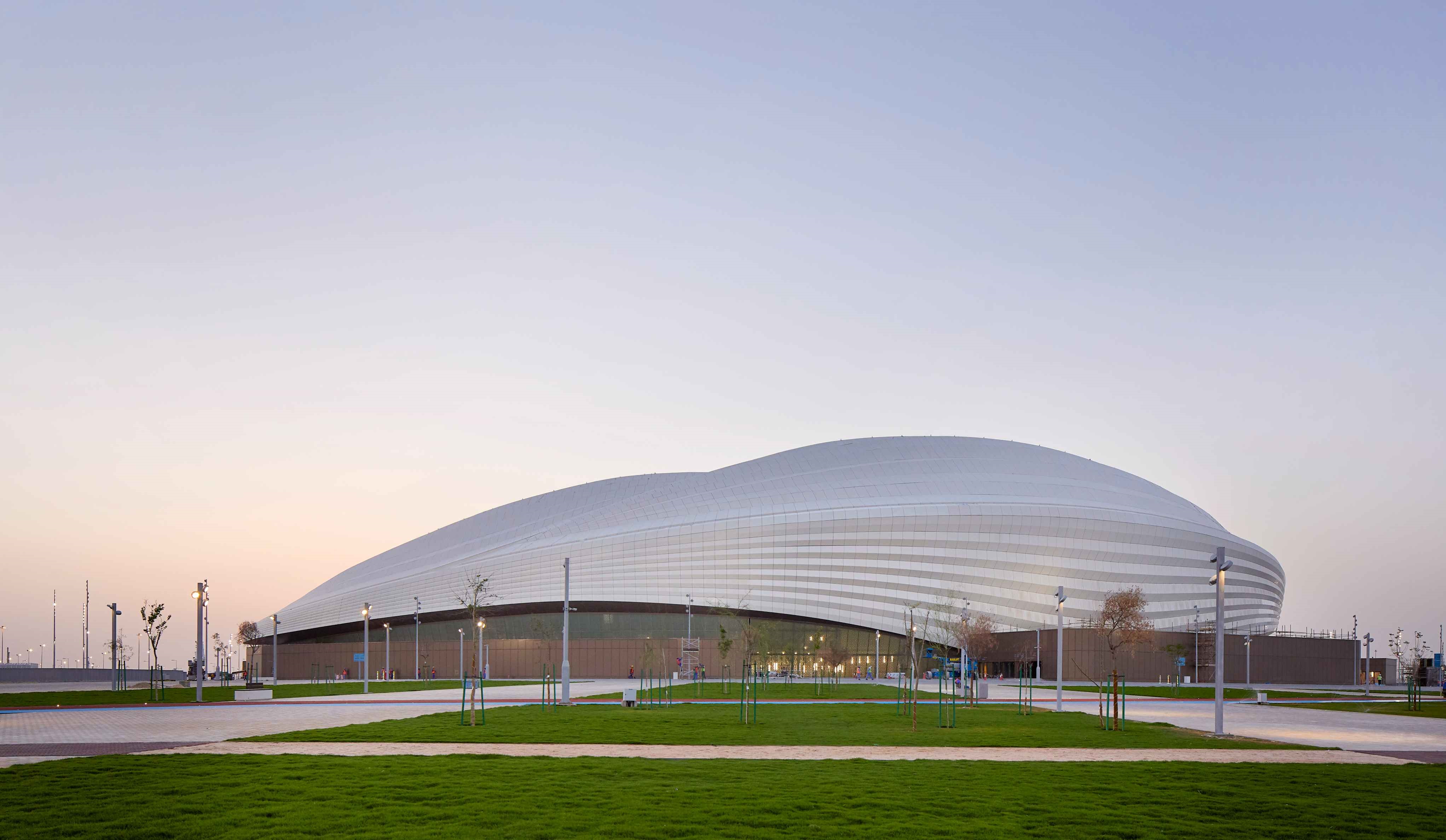 The Supreme Committee for Delivery & Legacy (SC) broke ground at Al Wakrah Stadium in 2014 and since then thousands of people from all over the world have made significant contributions to the development of the 40,000-capacity arena, which will host matches up to the quarter-finals stage during Qatar 2022.

To mark the first match at the stadium, we spoke to eleven people who have played a significant role in the venue's development to find out their memorable moments and get an idea of how they'll feel when the Zaha Hadid-designed venue opens for business.

"When we finished the seats, laid the turf and had the lights and sound up and running, it was a memorable moment. The pitch is probably my favourite part of the stadium as the turf was grown locally and is where the action will take place in 2022.

"It's great to see the stadium completed and it will be very special when His Highness announces that the stadium is open and ready to host matches during the World Cup in 2022."
Thani Al Zarraa became the Al Wakrah Stadium Project Manager in 2015.

"The day we laid the pitch I walked from goalpost to goalpost, or from where I imagined the goalposts would be, as they were not yet installed. I imagined the stadium packed with fans, two teams on the pitch, and in the presence of His Highness the Amir, and I got goose bumps.

"When I look back, I remember the engagement with the local community here in Al Wakrah and our efforts to build facilities they would use long after the World Cup has ended.

"I'm very proud of how far we've come. I've learned that project management life is not normal and that you can't do anything without teamwork and strong collaboration. I'm very thankful to my hardworking and eager team. Our time together has been both challenging and enjoyable."

Abdulaziz Al Ishaq played for Al Wakrah in the 1970s and for the past three years he's worked as an engineer on the Al Wakrah Stadium project.

"Firstly, I am so proud to be part of this landmark in the State of Qatar. I believe I have now been able to do something for my nation; a nation which has done so much for me.

"The Amir Cup final is an important moment that we are all looking forward to. I was lucky enough to play in the Amir Cup final on two occasions for Al Wakrah, so this will be extra special for me.

"You cannot compare this stadium to any other. You can only compare it to an artist sitting down with a paintbrush and creating something. It's not something you can create automatically on a computer – it is a piece of art. We were fortunate to have worked with Zaha Hadid and she gave us a really interesting and unique stadium. We are proud to have it here."

Najla Al Obaidan has worked as a Senior Architect at Al Wakrah Stadium since the project started in September 2012.

"I joined the SC in the same week the tender process for Al Wakrah Stadium started and had the opportunity to meet all the bidders. I would say my favourite time was during late 2013 when I got the chance to work with Zaha Hadid Architects and AECOM to finalise the design.

"My favourite aspect of the stadium is the fact that it's one of Zaha Hadid's masterpieces. I also love how it reflects the culture of Al Wakrah and how it's going to add value to Qatar and the local community.

"I feel so proud when I see the stadium now – it really is a dream come true. It'll be amazing when we host the Amir Cup final. Finally, the first of seven new stadiums for the World Cup will be delivered – I'm already looking forward to opening the others."

Williams Morales, Project Senior Engineer, has monitored progress at the site on behalf of the SC since 2014.

"My most memorable moment from a technical point of view was seeing the roof being lifted into place. From a personal perspective, I love seeing the field of play and experiencing the cooling technology, lights, video screens and sound system working together in harmony.

"The shape of the stadium is my favourite aspect – I love the design and I am sure it will be a reference point for football fans around the world in 2022.

"My reaction when I see the stadium now is simple: wow! I can't wait for Al Wakrah to host the Amir Cup final – I'll be really happy and very proud of all the hard work we've put in."

Senior Architect Moza Al Harami has been involved with the stadium's legacy and accessibility planning for the past three years.

"When I see the stadium now, I think it's a masterpiece. The form and façade are stunning – it's definitely one of my favourite Qatar 2022 designs. Part of my role has been to ensure the stadium is accessible for everyone, so my most memorable moment was when we invited members of the SC's Accessibility Forum for a tour. They were so impressed with the stadium and the level of detail that had gone into the planning from an accessibility point of view. Like everyone involved in the project, I'll be very happy and proud on 16 May when Al Wakrah Stadium hosts its first game."

Kiran Chandra Bairagi has worked as the Health & Safety Manager at Al Wakrah Stadium for the past five years.

"We recently reached 8 million hours on-site without a lost-time accident. This was a major milestone and one which illustrated the commitment to health and safety on this huge project.

"I'm amazed when I look at the stadium now – it's a technological marvel and I feel honoured to have been actively involved in its creation right from the start.

"The design of the stadium is beautiful, but what I'm most proud of is the teamwork we showed to get to this stage. When we host the Amir Cup final it's simply another step towards hosting the most significant event in Qatar's history."

Allison Taylor has worked as a Senior Master Planner across the SC's stadium portfolio since 2014.

"This is the first stadium the SC has built from the ground up and we have collectively 'cut our teeth' on this project. We have learned many lessons along this journey and built up strong relationships with our many stakeholders – something which is proving beneficial across our infrastructure delivery programme.

"I love the element of intrigue in the design of Al Wakrah Stadium. It's such a futuristic looking structure – it almost appears to be sitting on a stage from afar, but when you enter the precinct and approach the stadium, you engage with the spaces and its curves, which keeps you wondering what's around the bend.

"When I look at the stadium now I just think 'wow'. I can't quite believe it's finished! You get in such a routine of seeing a heavy construction site, but now to see the finished product after five years of looking at the renderings we've had on our walls, it's amazing. I'll be very proud during the Amir Cup final to have been part of the team to deliver the first stadium from scratch and of course be excited about what's to come in 2022."

Pasha Shahnawaz has worked as the Al Wakrah Precinct Planning Manager since 2013.

"The de-jacking, which started in April 2018, was a memorable milestone as all the temporary support for the roof structure was removed, leaving it to stand on its own. This was a great achievement and opened the door for activities such as roof cladding, seat installation and façade works, among others.

"I love the whole stadium, in particular the way the roof and façade look at night. When I look at the stadium now I simply think our vision has become reality!

"When we host the Amir Cup final, it will be one of the happiest moments of my life. I'll feel very proud that a project I've worked on is hosting one of Qatar's biggest sporting events."

Abdul Rahim has worked as a Senior Document Control Specialist on the Al Wakrah Stadium project since March 2012.

"Being part of the Al Wakrah Stadium project is the highlight of my career so far. I feel privileged to be a part of the team which delivered the first Qatar 2022 tournament venue from scratch – when I look at the stadium now I think 'we delivered amazing'.

"My favourite aspect of the stadium is the retractable roof and cooling system. It's a fantastic legacy that this stadium will be used all year round. I think the most memorable moment was the pitch laying and setting a new world record. It was a fantastic day and the stadium looked complete afterwards."

Ali Al Asmakh is the SC's Commercial & Procurement Director and was involved in the Al Wakrah Stadium project right from the start.

"I've been with the SC since 2011, so I was involved in the planning for the whole project, including full evaluations for each stage. The award of the main contractor joint venture after a long tender period was a big milestone in my career.

"This was the first procurement process for a stadium and I was involved in appointing a designer and project manager to manage the development. I was also involved in the commercial activities, such as invoices, correspondence, charges and settlement.

"When I look at the stadium now I'm so impressed. I love the external facade and shape of the venue, along with its prominent location. When the Amir Cup final takes place it will be amazing and we'll all feel rewarded by having His Highness the Amir in attendance."