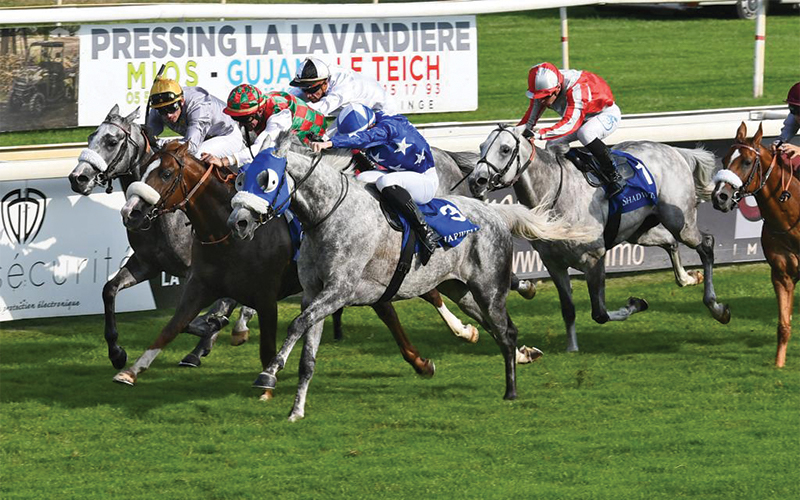 Paris, 4 July 2019 - His Highness Sheikh Mohamed bin Khalifa al-Thani’s Ebraz proved his superiority again when he landed the Group 3 Shadwell — Coupe Du Sud-Ouest Des Pur-Sang Arabes in La Teste, France, on Tuesday.
The grey six-year-old son of Amer had already been the favourite of the 1,900-metre contest for three-year-old and older pure Arabians, and he confirmed that he was the class act of the black type event and that he was fit and ready to land the spoils after a long break.
However, before scoring this victory in spectacular fashion, his fans broke out in a cold sweat when he fell on his knees while jumping out of the gate and was far from the front when things became serious. Yet, Ebraz managed to bounce from the back of the pack and was clearly above all of his rivals.
He surged to take the lead in the last strides and stayed on to win, under P-C Boudot, by a nose in front of the Antoine de Watrigant-saddled Taymour, who was seen as a winner for a while under FX Bertras.
Al Shaqab Racing’s Melabi completed the frame further three quarters of a length behind. Thomas Fourcy’s charge was ridden by Jerome Cabre.
Winning trainer Julian Smart was delighted with Ebraz’s performance. “I was scared when I saw him trip when they jumped out,” he said. “Normally in a purebred Arabian race, after such a start, it is over... But Ebraz is not like any other horse and he was ridden by a cracking jockey! He did his job. Now he has three options: Newbury, Goodwood or Deauville. Then, it will be the Qatar Arabian World Cup.”