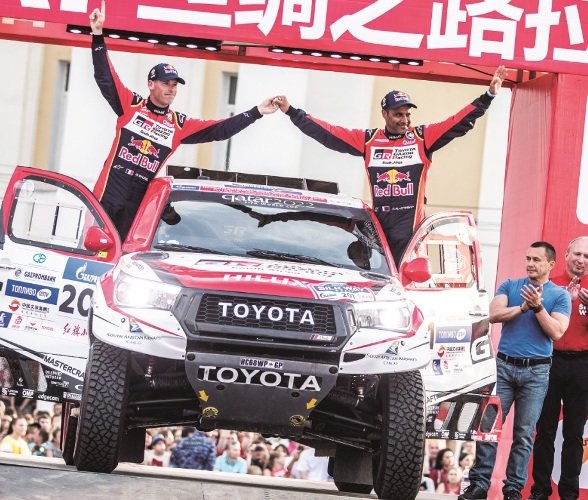 Baikalsk/Russia, 8 july 2019 -Qatar’s Nasser Saleh al-Attiyah was fastest in the opening stage of the 2019 Silk Way Rally between the Eastern Siberian city of Irkutsk and the nearby town of Baikalsk yesterday.
Overdrive Racing’s al-Attiyah and his French co-driver Matthieu Baumel carded a time of 29min 24sec on the opening timed test to carve out a slender advantage of 2min 32sec over the Frenchman Jerome Pelichet.
The opening day offered a short competitive section of 50.87km in a day’s route of 255.53km on a track through the Russian ‘Taiga’ forest.
Competitors then stayed in the small industrial town of Baikalsk, which was only founded in 1961 with the opening of a paper mill at nearby Lake Baikal.
The town is situated in the Slyudyansky district of the Irkutsk Oblast.
Overdrive Racing also held third position with Yazeed al-Rajhi.
It was a case of not making any mistakes with such a long and daunting challenge ahead over the coming nine days and al-Rajhi and German navigator Dirk von Zitzewitz settled into third place just 37 seconds behind Pelichet.
Dutchman Erik van Loon teamed up with Frenchman Sebastien Delaunay for the first time in the third Toyota Hilux and lost a few minutes to their leading rivals. The fact that it was such a short stage pushed the Dutchman down to 23rd overall, but he will be looking to leap back into the top five on the first of the longer stages today.
The event got underway on Saturday afternoon with the ceremonial start ceremony in Speransky Square in the centre of Irkutsk.
Today, the teams will tackle a selective section of 212.02km in a day’s route of 413.63km between the town of Baikalsk and Ulan-Ude in Russia before the route crosses the frontier into neighbouring Mongolia tomorrow.
Located in Eastern Siberia, Ulan-Ude is the capital city of the Republic of Buryatia and is located 100km southeast of Lake Baikal on the confluence of the Uda and Selenga rivers.
The event finishes in Dunhuang, China, on Tuesday, July 16.